I am from St. Louis, Missouri, and if you grew up in this city back in the mid 1900’s, Famous-Barr was the premier department store. The history of Famous-Barr goes back to before my mother and father were born. in 1911 William May of The May Company Departments stores, who already owned The Famous Shoe and Clothing Company, purchased The William Barr Dry Good Company, thus merging the stores as Famous and Barr Department Store, later shortening to Famous-Barr.

I remember three departments stores in St. Louis when I was a child. The first and largest was Famous-Barr. Their flagship store was an eleven story one-block big store in downtown St. Louis that opened in 1914. The other two stores were Stix, Baer & Fuller, and Scruggs, Vandorvoort, & Barney. My mom called the latter store Scruggs, until later years when the store became known throughout St. Louis just as Vandorvoorts. My recollection of the downtown Famous was when I was a young child, but those memories are vivid and dear. My mom would drive from our home to the Waco parking garage which was a few blocks away from the store. She would drop the car off at this indoor garage and leave the keys with them. I assume she was given a claim ticket for the car. I don’t remember because I was busy focusing on the candy bar machine in the lobby where you could get a  5¢ Hershey bar (that was squares, not rectangles), of which she would occasionally get for us girls as we waited for the city bus that would pick us up and deliver us to the front door of Famous-Barr.  When we were done shopping and came back to retrieve the car, the young men that would fetch the cars would drive fast down the ramps squealing the tires as they came down.

Walking into Famous-Barr’s huge store was an experience in itself. There were high ceilings and counters everywhere, along with big huge round columns that held up the structure. You could hear cash registers ringing, and instead of an intercom system, they had some sort of bell ringing system that would strike so many times to announce something to the managers. There seemed to be a lot of hustling and bustling about. Sometimes we took the escalator to the other floors, and some were wooden escalators, and as we neared the upper floors, the escalators were narrower. Usually we took the elevator. I was always intrigued by the elevator operators. I thought 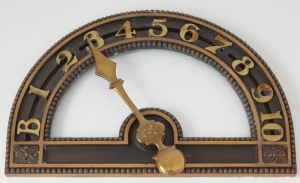 they were so smart because they knew what was available on each floor (remember I am a small child).  As the elevator door would open, the operator would announce the floor number and what was on that floor — “ Third Floor, Women’s dresses, Women’s shoes,” whatever was being sold on that floor. I also thought they were so smart because they knew how to drive an elevator—even my mom and dad didn’t drive an elevator! We had a newly built house when I was 6 years old, and this 1954 ranch home had sliding closet doors. I would play elevator operator in my closet, standing inside the closet, closing the door, sliding it open and announcing the floor number and whatever I dreamed up would be sold on that floor.

Christmas was a huge delight. As everywhere in the country, the big department stores

decorated their store windows for the Christmas holidays. We would go downtown and walk around Famous-Barr looking at all the wonderful displays of animated figures, elves, bears or whatever, and the all the toys on display. One window was the train display. It was my favorite window. A huge model train display,  that had mountains, towns, roads, and several trains were operating at once, and they whistled their train whistle and the crossing

gates would open and close.  I was mesmerized. When we were finished looking at the windows, we went into the store and to the 9th floor (or whatever upper floor it was), and went through the Winter Wonderland display with more animated figures and everything to make us even more excited about the commercial Christmas celebration. The Winter Wonderland would end with our visit with a Santa Claus who looked as real as I thought he could be.

There is so much more about my favorite store. I got my Lazy-Bones brand saddle oxford shoes in the shoe department. I remembered the name of the brand because I thought it was a funny name for shoes I am supposed to wear to school.  After the saleslady made sure they were a good fit, with room to grow, she took them out of the original shoe box and was delivered to my hands in a box

that when I got home became a school house with punch-out desks and children. I have no idea if it was just a special back-to-school promotion, but I know I loved that shoe box, and eventually it was in the trash! When I was in elementary school, we did all our back to school shopping in August at Famous Barr. We got new underwear, shoes, and dresses. This store was such a tradition in my family, that my mother bought all my nursery layette items from Famous Barr in 1948, and I still have the receipts. When you see what she paid, it is amazing how much she spent for this little bundle of joy—me!  Fifty-two dollars and nines cents ($52.09) was a lot of money in those days.  I know my mother believed if you bought quality, it would last forever.  I am not sure that is totally true, but most of the clothes she purchased were passed down to sisters and cousins.

As I got older, department stores were moving branch stores around town and into the suburbs. Unfortunately, I think that became the demise of these large multi story department stores in the downtown area of big cities. They were building stores where the people lived.  My favorite branch store of Famous-Barr was the Southtown store which sat on the corner of Kingshighway and Chippewa Boulevards. The store was on the northeast corner. There was parking around the store, but there was also a big parking lot on the southeast corner. If you parked there, you walked into a small building, that had steps and you walked down the steps and walked under the road.  Below the road and the store across the road was the “bargain basement.” There were no Walmarts back then. The bargain basements in the stores 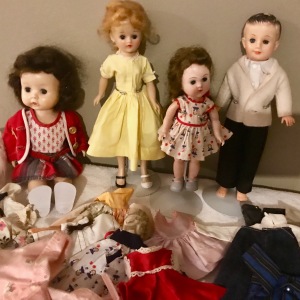 carried items that were less expensive than on the main floors. I don’t know (because I was a kid) if this is where they had their sale items and closeout items or if this was actually a less expensive line of goods being offered.

Two departments in the Southtown store still bring warm memories. The first one is the toy department. I would go in there and look and dream of owning a Jill, Jeff, and Ginny doll. They sold the dolls, and they sold the doll clothes. So even after owning those dolls, I would go to the toy department to look and dream of owning a new cute outfit for my dolls. My Littlest Angel doll also came from that store, and all these dolls were manufactured by the Ideal Doll Company. I still own my original dolls. 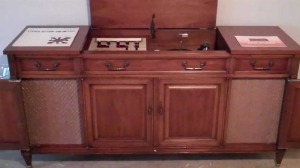 The other fascinating department there was the record department. High fidelity music had become the latest technology. People were buying Hi-Fi Stereo systems in big huge furniture type cabinets to put in their living

rooms, and we needed a lot of LP albums to fill our music collections. In those days, nothing was shrink wrapped. We went into the record department and looked for type of music we liked, and looked through the hundreds of albums. If we saw one we might like, we could take the record into a small booth, close the door, and set the record on the record player to listen to see if that was what we wanted. It was like a dressing room for records! My #1 favorite album bought this way was the Johnny Mathis Christmas album which is still a classic today, but we also had everything from the Boston Pops, the Mormon Tabernacle Choir, Mitch Miller (for sing-alongs), Kingston Trio, and Montovani, just to name a few that come to mind. 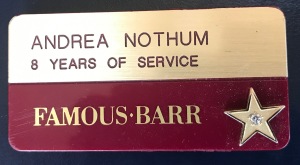 In 1992 I started working a Famous-Barr. If retail paid a good living wage, I would have been there until I retired. I loved being a subject matter expert on the products in my department. I was assigned to housewares, and wasn’t a big fan of kitchen stuff in the past, but now I am a kitchenware (dishes, flatware, cookware, appliances, etc.) fan and love having great tools of the trade. I moved from being a Christmas part time employee to full time on the sales floor, and finally to the Human Resources office where I hired sales associates and trained new hires.  Even after I left full time employment at Famous-Barr, I came back every so often for three years to do new hire POS [Point of Sale] training (how to operate the cash registers).  I even got to keep my company discount during those three years–a huge advantage of working there!

I was truly sad to see Famous-Barr sold to Macy’s and just become another Macy’s store. Department stores have changed over the years and they are no longer a social icon where celebrities would appear to promote their brands, and special programs would be offered the people in the community. The elevator operators disappeared a long time ago, and I found out any of us could “drive” that elevator, but not any of us can tell you what to find on each floor of the store. Departments disappeared, such as records, toys, and nylon stockings. People got used to discount stores where they served themselves, and the subject matter experts have disappeared from the department stores. Sometimes it’s just hard to find someone to ring up your sale.

Time moves on, and things change for various reasons. I will still have sweet feelings about wandering the floors of Famous-Barr, and my time many years later when I was privileged to work there. Today I go shopping to buy what I need. I don’t wander the store—I’m not a shopper. The stores are not a social place for me. It’s okay. What is it about a sweet memory like this that makes me feel warm inside?  Thank you, old fashioned Famous-Barr, for giving me memories of “the good ol’ days.” 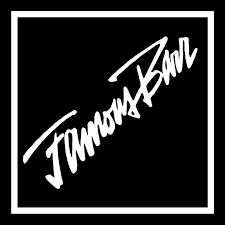