I am finally back from all my traveling.  It has been a long six weeks.  We traveled to London, England and Seligenstadt, Germany.  Then we came home for a week, and left for two weeks to finalize the purchase of our new home in San Tan Valley, Arizona.  So, I thought I would tell you about my European trip, since it is the first time I have left this country for a vacation.  I realized that there are a lot of words, and I wanted you to see what I experienced, so I am going to give you a pictorial tour with words as explanation.

We flew to London via Chicago and Dublin.  When we arrived at our Airbnb in the suburb of Hammersmith, it made total sense why it was called the balcony suite.  It is the very top of this very tall house.  My bum knee was not happy to see we have almost five flights of these narrow steep steps to take to get to our room, but what a view we had.  At the end of our street was the Thames River, and in this area are rowing clubs and pubs.  There was  a lovely little park, and people walked, ran, biked, and skated along the walkway next to the river at to the pubs along the way. 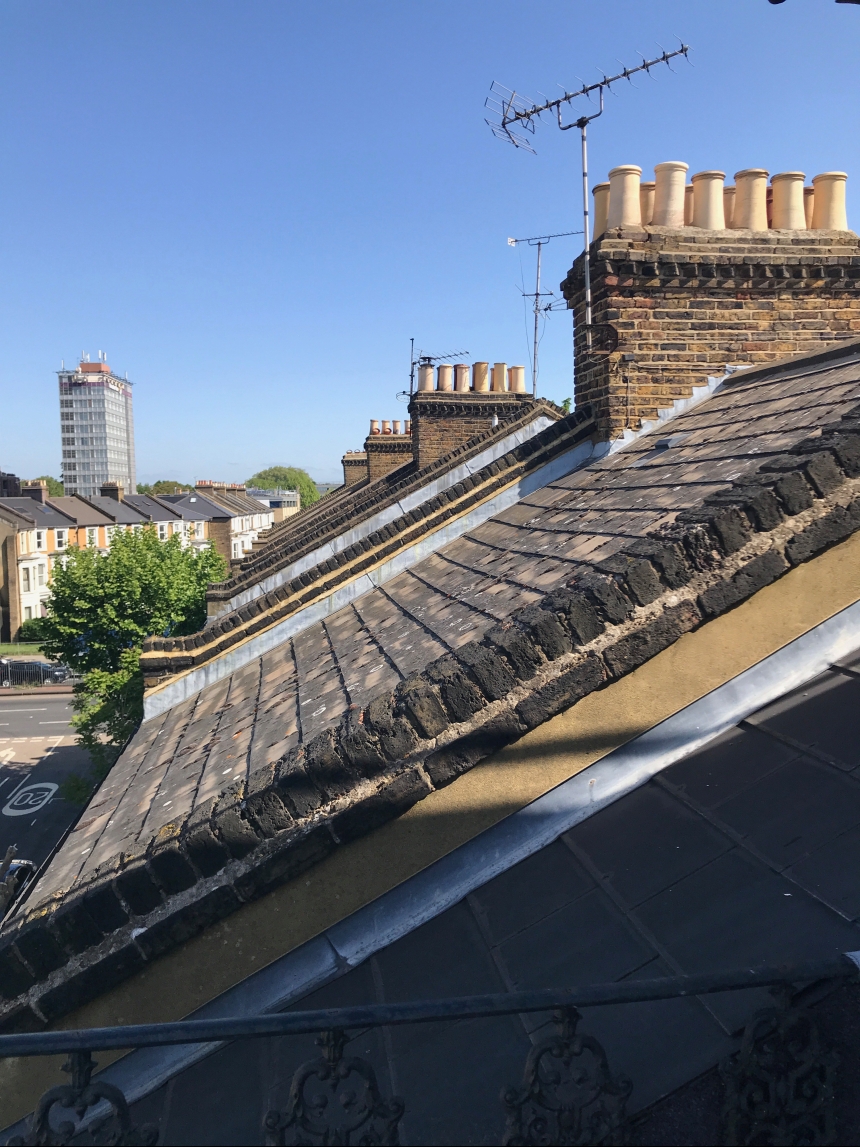 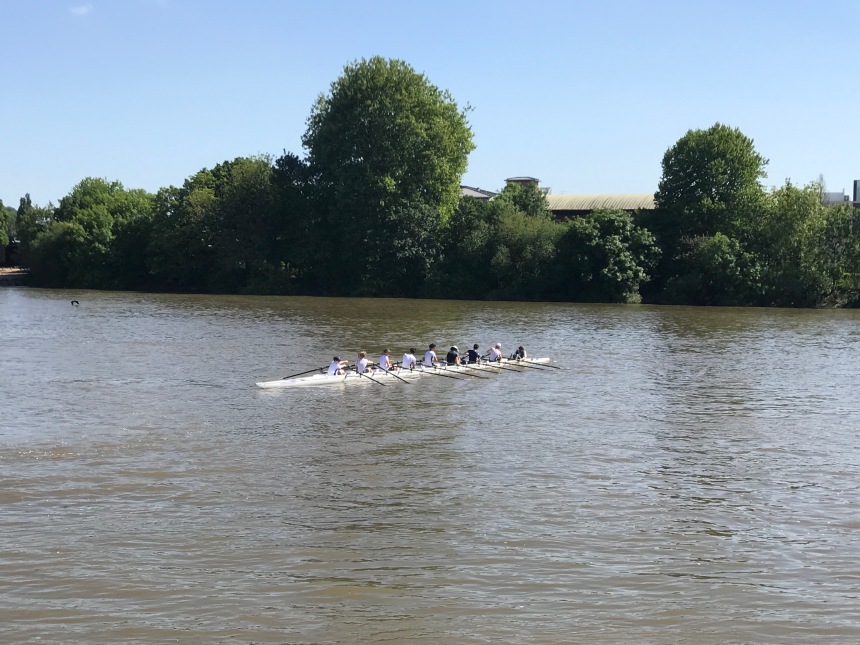 As I stood on the balcony and took the picture across the roofs, I imagined Bert the Chimney Sweep singing and dancing along these rooftops! Yes, my inner “Mary Poppins” peeked through.

We took a tour that was supposed to include Windsor Castle, but since Prince Harry and Meghan Merkle decided to get married the weekend we planned to be in London, they switched out castle tour to the Hampton Court Palace.  There one of those red phone booths outside the gates–not thinking that’s an original with the palace!  The original palace was built by Cardinal Woolsey in the early 1600’s.  He later gave the property to Henry (probably trying to save his head from rolling)!  It has the largest working kitchen of the castles, but I sure would miss my modern appliances. Queen Victoria opened the palace to the public in 1838.  We moved on to Stonehenge and viewed this odd conglomeration of rocks.  It is thought to be an ancient burial grounds dating back to around 3000 B.C.  As we took our bus ride there, we passed fields and fields of canola–who knew they would be so beautiful. 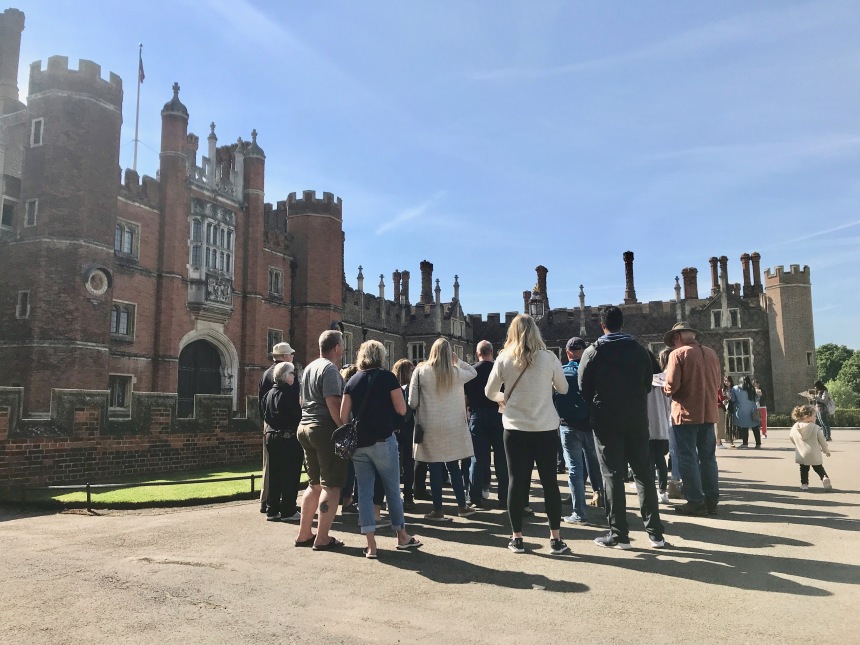 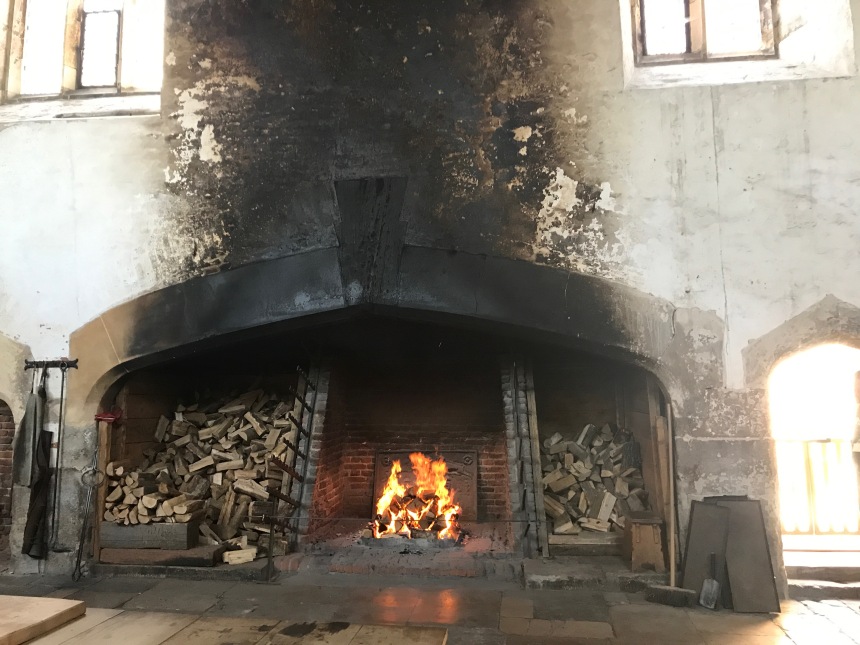 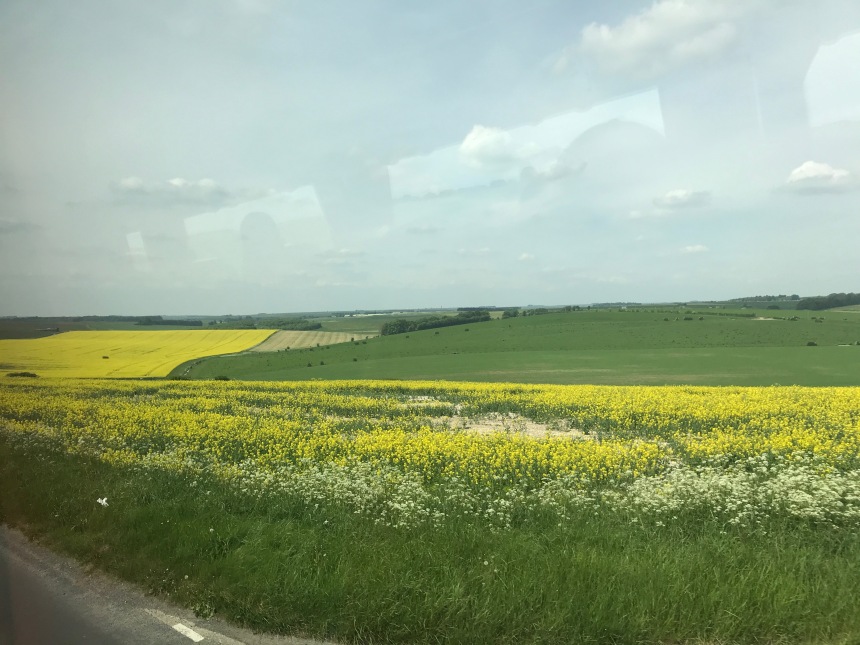 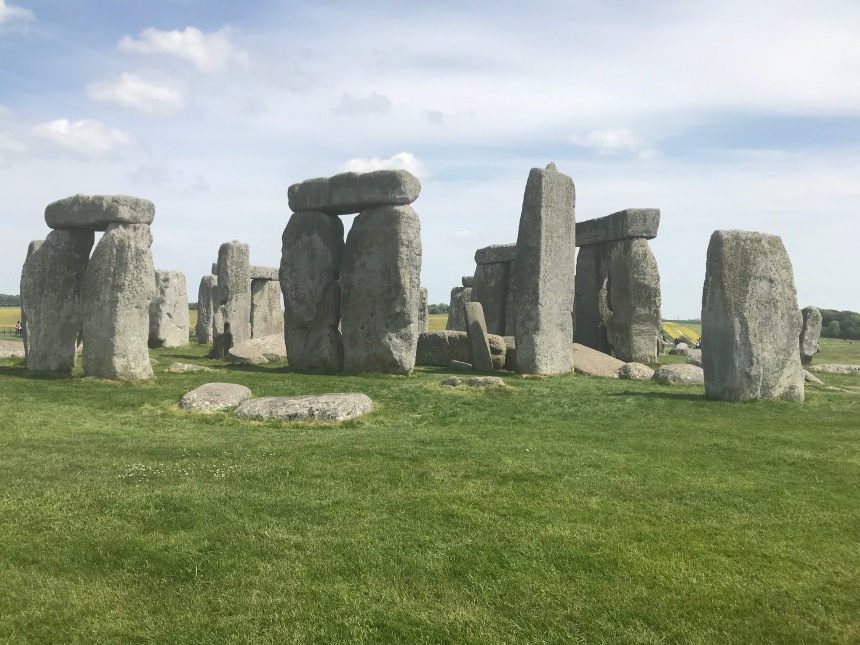 After Stonehenge, our tour continue to a small village where we had lunch at a pub, The George Inn, that had been established in 1361.  Then the bus continued to Bath, England.  We passed through the rolling hills of England, enjoying the view, of rural tranquility.  The city of Bath became a spa  in 60 A.D. when the Romans built baths and a temple in the valley of the River Avon, although hot springs were known even before then.  The Roman bath is still in operation.  Dennis and I walked around the old city–most picturesque, and enjoyed the village and the people-watching. 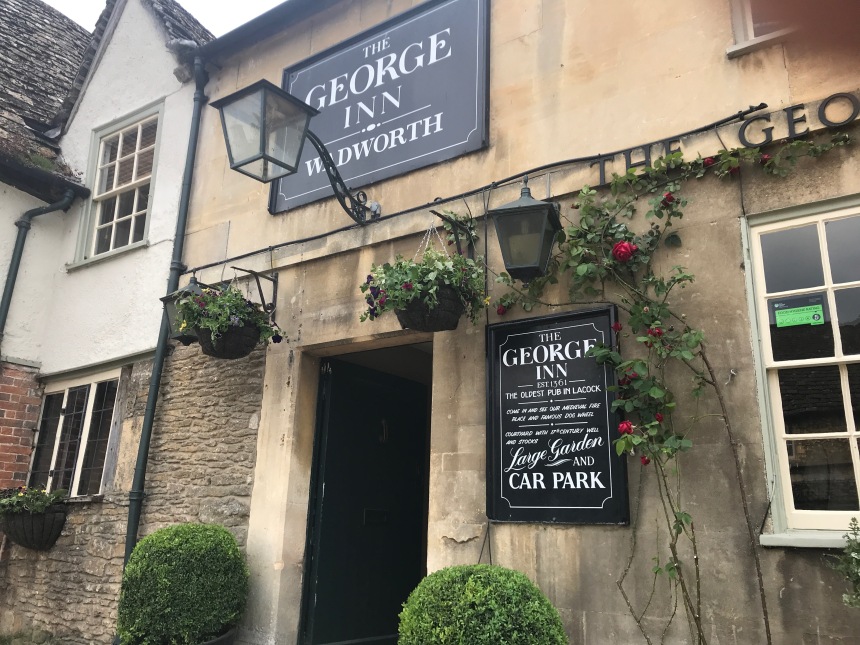 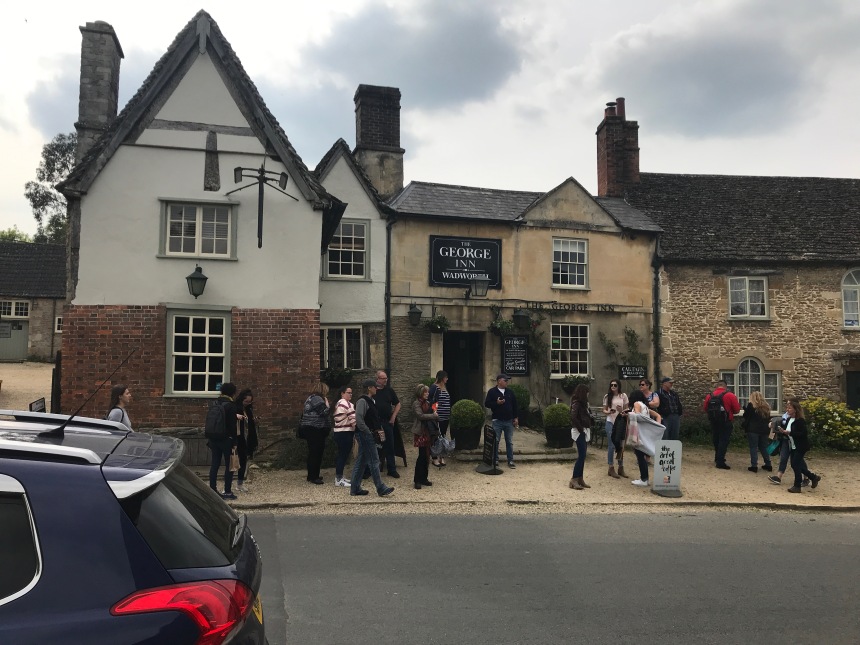 One day we took the train to Southampton.  It was a lovely two hour train ride.  Our sole purpose of this trip was to have lunch with Dan and Dishi.  Dan is my youngest son’s best friend from college.  He married a young lady from Southampton, and they own an amazing coffee shop called The Docks.  The food was fabulous, the company great, and we even got to meet Dan’s parents who live only 80 miles from us in Missouri, but we met them for the first time in Southampton! 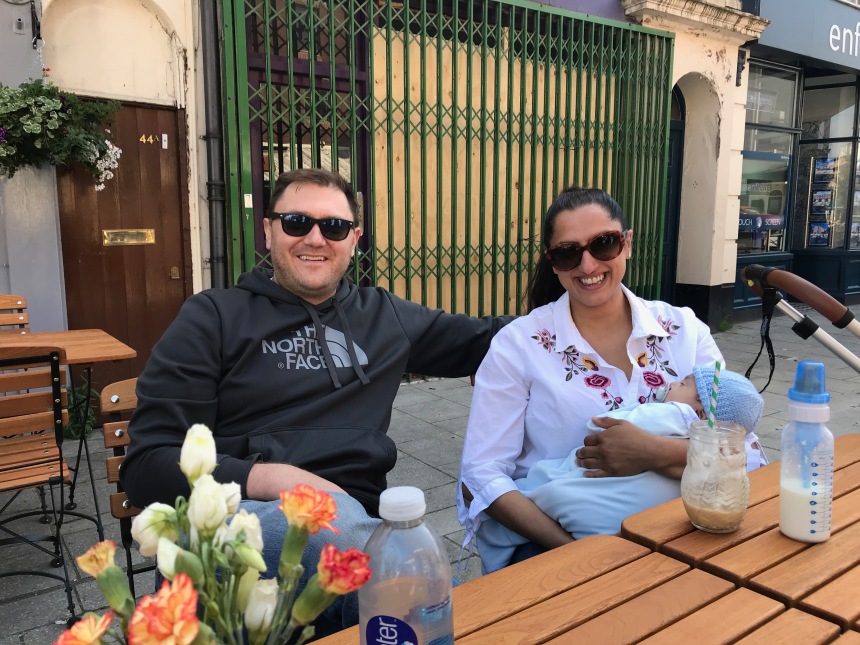 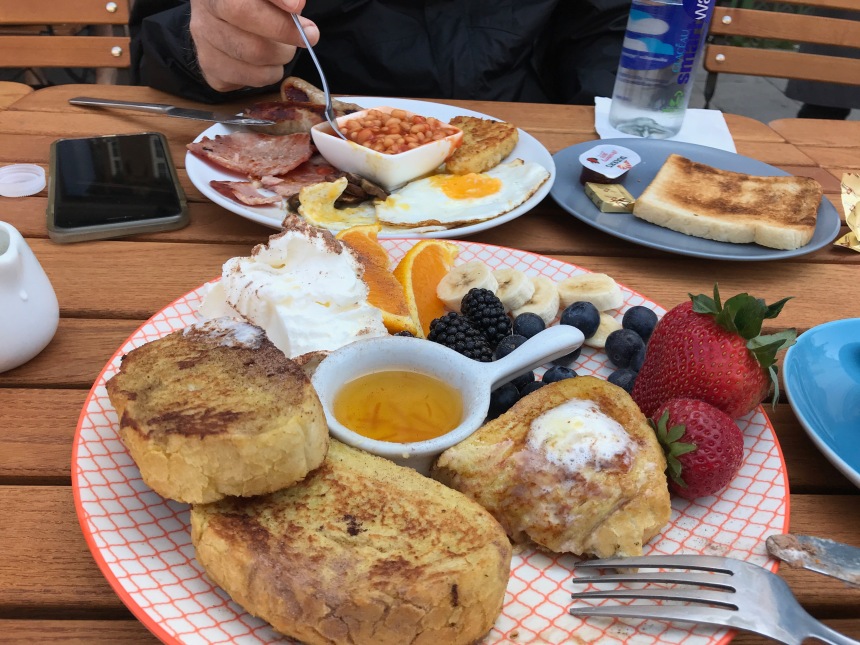 Our trip continued in London, first visiting the Tower of London.  My knee was killing me that day, and moving around was very difficult, so I didn’t tour around as much as I wanted.  This is the infamous place where Henry VIII imprisoned and beheaded wives.  On the good side, it is where the Crown Jewels are kept.  Unfortunately, we are not allowed to take photographs of the Crown Jewels.  I can tell you, though, there is a room where we stand on a conveyer to pass and are awed by the quantity of bling!  I did not realize that each monarch has their own crown and scepter, so there were a variety of crowns.  It was pretty amazing! 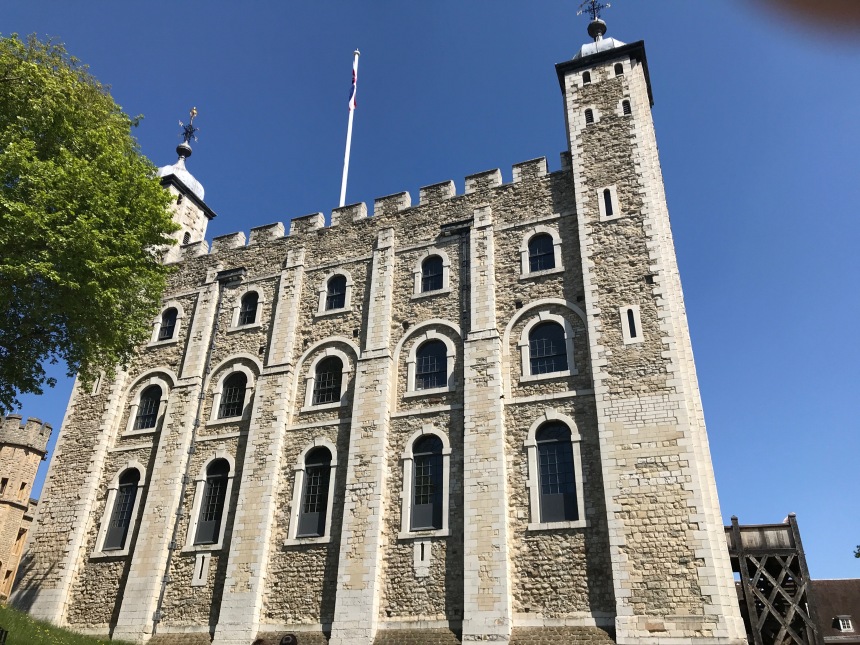 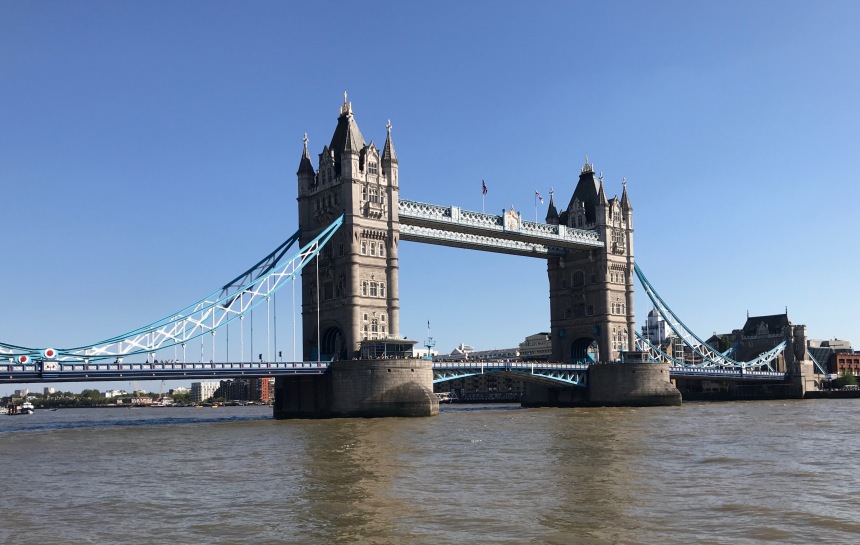 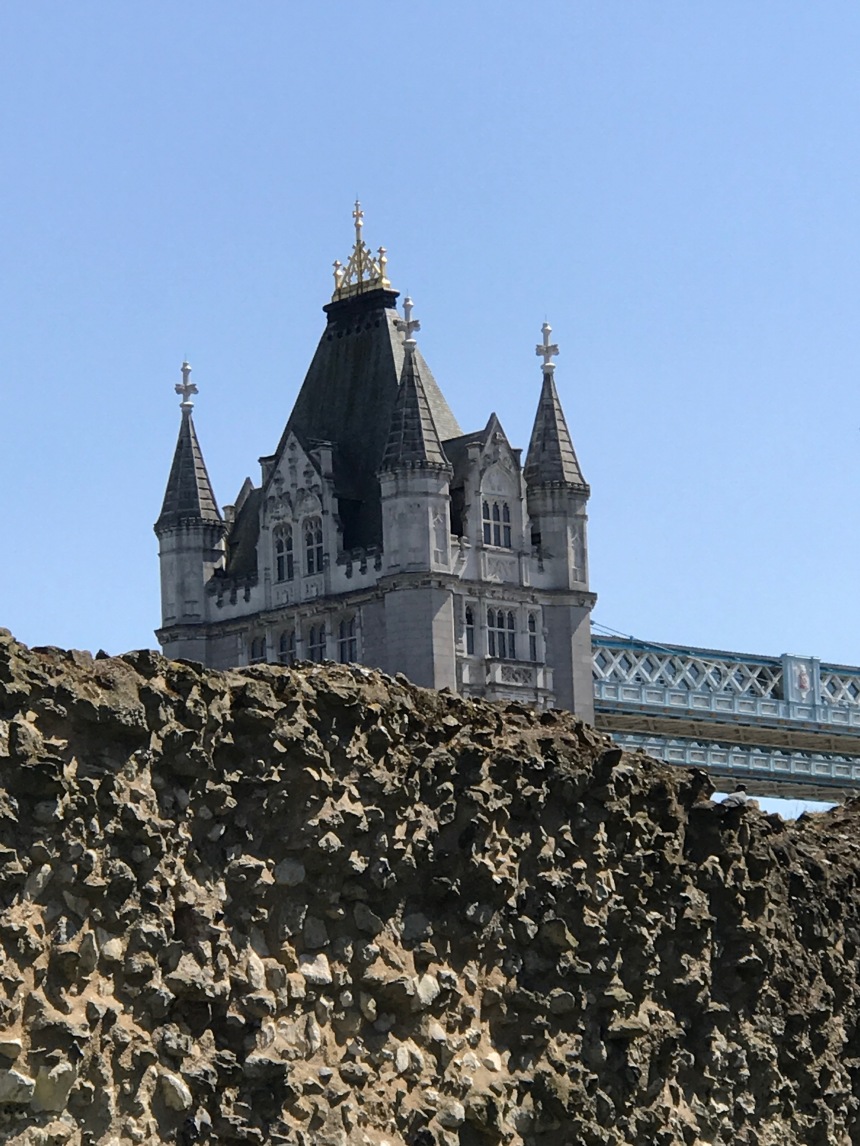 We had lunch at Harrod’s.  I was greeted by a very kind and friendly doorman.  We sat on a $30,000 sofa and looked at a really neat $14,000 dining table, of which the salesman wanted to ship to our new home in Arizona–don’t think so!  Lunch, though, was reasonably priced and very good. 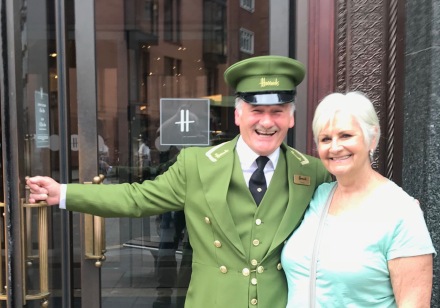 Our last day in London included a tour of Winston Churchill’s underground war rooms.  This is where he and the other British leaders worked and lived underground when the Nazis were bombing England.  Living in Fulton, Missouri, we have the National Winston Churchill Museum on the grounds of Westminster College.  This tour rounded out our learning from the museum in Missouri.  We were also supposed to tour Westminster Abbey, but there was some confusion in the time, and we missed the tour–something to do the next time.  Also, we were unable to use our tickets for the London Eye–being newbies to these sites, our tickets were on our phones, but they required them to be printed on paper–well, we had not printer, so we just got photos, but no ride. 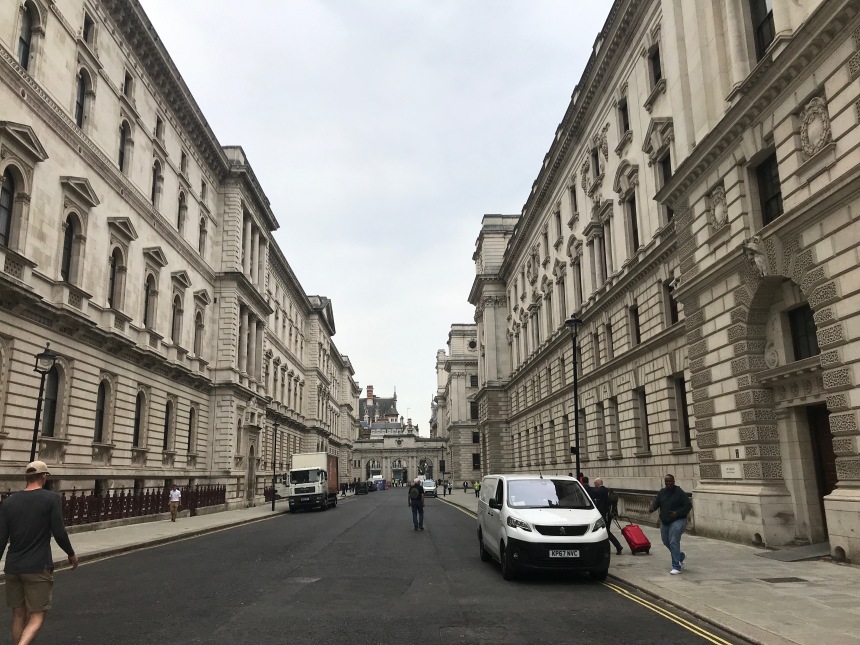 Last but not least, we saw the Changing of the Guard.  I loved all the pomp and circumstance.  I will leave you with the video, and next week I will let you know about my favorite part of the trip–Germany!

Who’s Crawling In Your Brain?

This is my last week of traveling. Next week will start a new round of fresh blogs. In the meantime, here is another oldie but goodie. Stay tuned–next week, new blogs!

What do you do when you are lacking confidence?  We all have times we feel unworthy, lack the confidence to step outside our comfort zone to do something new, different, or challenging.  I couldn’t figure out what was holding me back.  Why did I know I could do something, and yet some little small voice was speaking in my head that I couldn’t, or I didn’t deserve more, or I wasn’t smart enough, or not enough of something.  You know those little voices we listen to when we know we shouldn’t?  Those little voices that are the negative feelings we have?  Now, just to make sure we are on the same page, I am not talking about audible voices.  I am talking about the seeds of doubt we have from time to time.

A few years ago I was working with a…

Still traveling and sharing some my favorite past blogs. This is my family history–the event happened 83 years ago this past Sunday.

When I was a teenager my mom wouldn’t let me ride in cars with another teen driving. She never said why. I could go to an activity at school with my friends — if she drove. Was it because they were teens? Or was it because she felt more in control if she drove? About a year before my mom died, I interviewed her about her life. I then printed her story and made copies for our family. There are many more questions I wish I asked, but the stories I have will have to suffice.

So, back to riding in a car. When my mom was 16 years old, she was in an automobile accident that has become a legend story in the family. Let me set it up so you know all the players.

Who Is In Control?

Sharing a previous blog while traveling–this one is about the life changer for me.

“Came to believe that a power greater than ourselves could restore us to sanity.”
That is Step 2 in any twelve-step program. It comes after the 1st step for codependents, which is, “We admitted we were powerless over others – that our lives had become unmanageable.”

The 2nd step is a tough one for many to get through, but one cannot move on to Step 3, “Made a decision to turn our will and our lives, over to the care of God as we understood God,” without wrestling with step two.

Many of us who went through 12-step programs (mine was for codependency) have had some sort of religious upbringing, but when you are at the point that you admit you are “powerless over whatever addiction or behavior,” one has pretty much thrown out the idea that there is a higher power working in their life. For me, it was…