I’m on vacation this week, so light a light-hearted blog is in order. It is time for a little nostalgia. Those of you who are of my generation will nod your head in remembrance, and those younger will shake your head in disbelief. My parents ran their construction company from an office in our basement until I was in junior high. Then they moved to their own office building, and I worked every summer in the office. What I didn’t realize is how high tech we were back in the 60’s.

Remember the ditto machine? The one that was stinky and everything it printed came out in blue fuzzy type? Nothing was fine and clear, but it was readable. Yeah, we had one. Then we upgraded to the mimeograph machine. It had a waxed type sheet that you type on. You moved the ribbon to the off position on the typewriter so that you could get a clean imprint of the typewriter key on this waxy sheet. That mimeograph machine used very thick ink that seeped through the impressions made on the stencil. If you inked up the machine too much, goopy ink flowed all over the paper—one had to prime the machine properly. I became quite an expert on that machine.

One of my favorite office machines was the Addressograph machine. It had little metal cards (kind of like a dog tag, but rectangular like a credit card). It had the name and addresses of subcontractors that my dad’s company used. (We would send post cards to all these subcontractors informing them that Nothum Bros. Construction Co. was going to bid on a certain project, and they could come to our office to read the blueprints and make their bid to us for the work they do). I would put the cards in a holder that stacked them, then pull\ a lever to move one to the center of the machine, place the post card on the spot, pulled the handle, and the address would be printed on the card. Then I moved

the lever that pushed a new metal card to that place, and moved the other card to a new holder. We could address hundreds of post cards and envelopes in minutes! I have searched online for a photo of this machine, but could not find one that looked like the one I used. There was no such thing as Avery mailing labels back then.  We also had a check protector, that punched the total of the check on the line where we write the number—that way no one could take a pen and change what the amount was. It embossed the amount on the check with ink and little holes.

The business rotary dial phones had the additional lines on a row of buttons below. It was upgraded to push button, but the same line configuration—our first business lines for Nothum Bros. Construction Co. was VIctor 3-1414 and VIctor 3-1415. We were high tech!

Calculators—there was no such thing as a hand-held calculator—the bigger the better. At my dad’s office we had Olivetti calculators, and 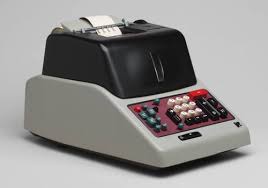 they were huge, and they could, add, subtract, multiply, and divide! What a wonder, and I love the chugging noise it made when doing the calculating.

All letters, bid proposals, punch lists, envelopes, and any other documents were typed on a typewriter. Our office had IBM Selectric typewriters. Instead of having individual keys like the

old-fashioned typewriter, it had a ball with the letters and symbols on it. You could snap the ball off and attach a different ball if you wanted to change fonts. We had a couple different fonts—cool stuff!

I learned word processing on an Olivetti word processor. The next company I worked for was

using the Wang word processor. We were in the high-tech world. Then came PC’s that changed every office function—it was a word processor, an accounting machine, and now the functions it performs are endless.

Those office machines I used in my day were eventually replaced by the computer, the printer, and Wi-Fi. Today we get on our computers and we do the following things: pay bills, write letters in our word processing software that may be delivered through email, or we make multiple copies on our printers, and print labels that we attach to envelopes, we go to our spreadsheet or accounting programs and do mathematical calculations. One machine (computer), along with a printer, connected to Wi-Fi and we are in business. Easy and streamlined.

Remember the first office computers? We had dot matrix printers and the paper was connected and we thought it was the cat’s pajamas! We progressed from large floppy disks, to small floppy disks, to little square disks, to CD’s, to hard drives that could hold all the data, and now we can store our data on the cloud. Be careful, a good rainfall, and all your data could land on your roof!

Doesn’t it make you wonder what our children will be using in the future that will make our computers, cloud storage, and smartphones look obsolete?