What I didn’t realize that hurt is a form of anger. If we don’t feel angry about it, we are denying we feel hurt. The question is, what does one do with this hurt?

People fail us all the time. That is just the way it is. We are human beings who can be intentionally or unintentionally cruel. Maybe cruel is too strong of a word. We can be hurtful to others in our actions or inactions. Possibly we are not even hurtful, but from someone else’s point of view, it is hurtful.

If this hurt festers, it becomes a big ugly sore. That is what happens when relationships break. I could try to heal this hurt so it wouldn’t fester, but when I was going through my “dark years,” I had no idea how to heal that hurt.

One day someone told me that I had to forgive all those people who I felt hurt me. Really? They hurt me? Why would I do that? There is biblical reasoning for forgiving. God forgives us, and who are we not to forgive? We are commanded to forgive.

On a practical side, for those of you who don’t want a biblical answer, one cannot move forward without forgiveness. Remember I mentioned in an earlier blog about people who try to get better but they have one foot nailed to the floor. Unforgiveness (is that a word?) will nail our foot to the floor. What happens when we try to move forward—we can only walk in circles—getting nowhere.

When the hurt and pain from someone is not forgiven, it pops back up in our faces and we feel the hurt, the anger, the betrayal, the pain all over again. It is hard to live a life of purpose when those feelings keep popping up. They begin to fester, and anger takes over the hurt, and we have no where to go with that anger.

So, think about this. When you allow the hurt you feel to come back over and over, you are actually allowing that hurtful person/behavior to have control over you and your feelings. Really? Are you really going to allow someone else to control how you feel from day to day?

Forgiveness is not about the person who hurt. Forgiveness is about us getting better—healing from the pain—moving on in our lives to fulfill the purpose we were created for. It frees us up to be who we are meant to be.

Sometimes it is good to go to the person to tell them you forgive them. Sometimes that person is toxic, and one shouldn’t approach them. Forgiving doesn’t mean we have to be back in relationship with that person. It just means that we acknowledge that they hurt us (intentionally or unintentionally), and we can let it go, and not let it affect our lives any longer.

The American Psychological Association stated this definition: “Forgiveness is a process (or the result of a process) that involves a change in emotion and attitude regarding an offender. Most scholars view this an intentional and voluntary process, driven by a deliberate decision to forgive….This process results in decreased motivation to retaliate or maintain estrangement from an offender despite their actions, and requires letting go of negative emotions toward the offender.” ~American Psychological Association. Forgiveness: A Sampling of Research Results. 2006

The thing that happens when we forgive is that we change our emotion about the offender. We are no longer wanting to retaliate or let them know how angry we are. We let go of the negative emotions. This is not an easy process, and it may take time, but it is liberating.

When I realized that I needed to forgive all these folks, it was like a weight was lifted off me. It also changed my relationship with many of these people. I was also capable of setting boundaries, that kept me from being harmed. I let some people know that I deserved respect as much as they deserved respect, and if they could not treat me or talk to me respectfully, I was out of the conversation or their presence. I didn’t say this in an angry manner. I was no longer angry at the person because I had already forgiven, but I set my boundaries of how I would allow someone to treat me.

I distinctly remember a time when a person who I told this to crossed the boundary. I was on the telephone with him, and in the conversation, he became belligerent, and said some unkind things. Rather than argue back, which would serve no purpose, I calmly said “I am hanging up now.” I didn’t need to say why. I had already stated my boundary to this person a long while before. I hung up the phone. A few days later, this person sent me a note apologizing for his behavior and what he said. We restored the relationship. That isn’t always going to happen. But, what will always happen is if you calmly let them know their behavior is unacceptable, you will have the peace and not the anger. I was shocked how well this worked, and wondered why I hadn’t done this years before! 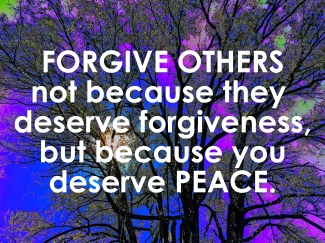 Forgiving is a powerful tool we all have in our tool kit. Why do we let it lay there unused? We like pulling out the hammer and banging away, taking out the saw and cutting things up, and we will always have a mess on our hands.

There is a reason you see the bumper stickers of 12-step group members that say, “Let Go, Let God.” Forgiving is about letting it go. We don’t have to be God—we don’t have to punish. We don’t have to judge. We can do what God does—forgive. We can let go. We can live life. We can pull that nail out of our foot and start walking forward.

It grieves me to see people who are hurting and angry, reliving over and over the hurt they felt. At some point, we have to deal with that anger and let it go before we start having unhealthy behaviors. It takes time. It may take doing it over and over until we can let it go. That’s okay.

If you cannot talk to the people who you feel hurt by, find someone you can talk this through with so that you can finally say, “I forgive them, and I let it go.” Make your boundaries strong, and loving. Emotionally healthy people will respond positively. 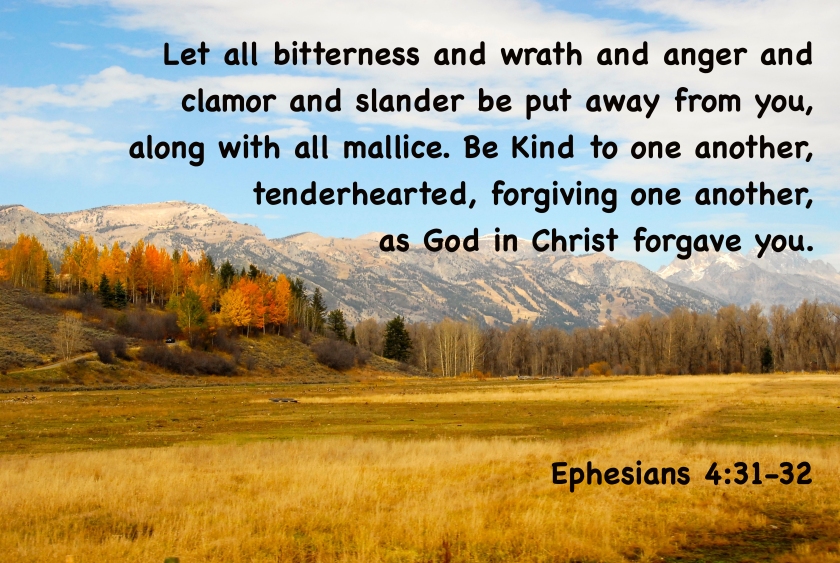