Class reunions — have you ever attended one? Why do we get together for such events? A better question — what can we make of such events? Are they for getting together and reminiscing about our youth and the crazy things we have done? Are they for us to show up and show everyone we really made it in the world? What are the reasons you have attended or not attended a reunion?

I have attended several high school class reunions. I attended the 10th, 20th, 40th, 45th, and 50th. When I was a senior in high school, the thought of being 50 years older sounded like an impossibility. Surely we would all be dead by then, because isn’t 67 or 68 years old really ancient to a 17 and 18 year old? Ha!

I attended Lindbergh High School in St. Louis, Missouri. I didn’t have any friends in high school. I had acquaintances, some really nice acquaintances, but not true friends. I am the youngest of three daughters in my family, My dad was an immigrant who arrived in the U.S. at the age of ten. My mom was a first generation American—both her parents were immigrants. They were hard workers, and went for the American dream. My dad started a business as a building contractor when I was a little girl. He said during that time we kids wore patches on our patches. I don’t remember being poor. I don’t think children know what poor is—if they are in a loving home, they are fed, and have clothes to wear, they don’t know that their parents are struggling to make ends meet. My parents never went to high school. They thought their daughters needed to be educated, but I don’t think they really were sure what that meant.

My parents were also very religious. My whole upbringing revolved around the church. We were in church every Sunday. My mother taught Sunday School, and she was the church treasurer. The “approved” people for me to be friends with were the kids from church.  We attended a small church. Almost everyone was related. There was probably never over 50 people, if that many, in attendance any Sunday. My social life revolved around church.

When I was in high school, I got involved my junior and senior years in drama club. I

was not an actor. I probably could have been, but I had no confidence in myself, so I was happy to take roles working on the business side of productions. I did publicity. I still have copies of the newspaper articles I wrote for the local newspapers promoting the Junior Play, “Meet Me in St. Louis.” I worked back stage at our largest production, the annual variety show, and my senior year I was in charge of ticket sales. I carried a lot of money on me everyday selling tickets, reconciling the sales to the tickets, and daily turning in the proceeds to the school office.

I worked with many classmates, but I didn’t socialize with these classmates. I never felt as good as I thought they were. I know that sounds funny, but I thought they were all connected with each other.  They went to school dances together. I wasn’t allowed to go to dances. They joined clubs and the girls had sleepovers. I wasn’t part of that.

So, the first reunion rolled around 10 years after graduation. I still remember it. I was now married, had two children, and just found out that I was pregnant with baby #3, but not showing. I felt good about my ten years of accomplishments—I had a bachelor’s degree, a husband, a house, and 2.5 children. I think I went to the reunion because I was curious how my classmates did. I liked them, and cared to see them. I also think I wanted them to know I was successful like them. I wasn’t the odd girl who couldn’t associate with them. Whatever . . . .

I went on to attend the 20th, and then took a break for whatever reason until the 40th reunion. I even volunteered to be on the committee for the 40th reunion. This reunion was a turning point for me. We were at a committee meeting, and the registrations were rolling in. There was a person who registered for the reunion that none of us on the

committee recognized as a classmate. He must have been, he was on our list of alumni, and he responded. One of the committee members stated that we were no longer 17. It didn’t matter if we didn’t know him, we needed him to feel welcome. Wow! We were no longer thinking like teenagers. That was the beginning of the best reunions. There was a small turnout. We had 426 graduates in our class, and the total turnout was about 100 with half being spouses. We passed around the microphone and let each classmate share whatever they wanted. We talked to everyone, and the evening was a success. That evening one of my classmates came up to me and invited me to join a large group of them going to a local bar after the reunion. Really? I’m in the “in-crowd” and have been invited to an after party?

That reunion was the beginning of a shift in our class reunions. Everyone had such a good time that a group of local classmates got together informally at a restaurant for dinner on a bimonthly basis. This is how I started to become friends with a group of folks that I didn’t even associate with in high school. 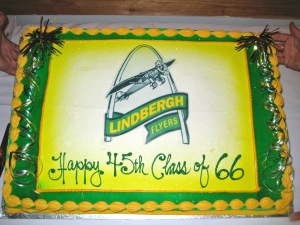 We repeated the small reunion for our 45th. I really pushed for the 45th reunion because shortly after our 40th, one of our attendees passed away. We had good addresses for the class, and we were getting older. Time to meet more often. Once again, we connected, not as buddies from high school, but as adults who had lived life.

Last year we had our 50th reunion. It was by far the best reunion we had. Approximately 10% of our class are deceased. It may be more—there are about 100 folks whom we have lost all contact information. Some could be deceased in that group also. We had a very large turnout of classmates, who traveled from afar to attend. I set up a Facebook page exclusively for the reunion, and over 150 joined that page. For over a year, we had conversations on this page about our lives as classmates. That Facebook group page is still going strong. People still post on it, and some even plan events for the group on this page.

A few things we all learned over the 50 years:

I now have a lot of friends, or really great acquaintances, from high school. The group in St. Louis still get together on occasion. One classmate who lives out-of-town wanted to see everyone when she came home for Christmas, thus the annual Faux New Years party began. This year will be the third such party. It is called a Faux New Years party because it occurs one evening between Christmas and New Years at a local restaurant, and we are usually done before midnight.

I have learned that we may not be best friends, but we love to see each other, and to share our lives today. This past August my husband and I hosted an Eclipse Party at our home. We live in an area of total eclipse. About 20 classmates and their spouses drove 90 miles to our home to spend the day, having a pot luck, watching the eclipse, swimming in the pool, and visiting. Not a single one of these folks did I hang out with in high school. It doesn’t matter. We are not 17 anymore.

I have heard other people say that their high school class is still snobbish even years later. That is too bad. They lose the joy of getting to know each other, and caring about them in their later years. Our group is diverse. We are not the same politically, or by religion, or life style. The thing that is important is that we shared a small time in history together, and now we have reconnected to appreciate what each has lived for 50 years, and we rejoice in their good news, and we grieve along with them in their hard times.

What a blessing to be able to go full circle with a group of people from my youth.

“The typical expression of opening Friendship would be something like, ‘What? You too? I thought I was the only one!”