Today as we were trying to figure out what to do on vacation day #18, I discovered that the Tupperware Headquarters was still in Orlando. It brought back a lot of memories for me, so we decided to drop in and see what they had to show.

I was at this location in Florida in 1976 for the annual Tupperware Jubilee. There were thousands of successful Tupperware sales people, managers and distributors attending this big convention. They rolled out new products. They gave a lot of recognition. We won a lot of prizes. I was promoted as a manager at the ceremony at this convention. I was almost 28 years old. I was a mom of two baby boys, and was pregnant with baby boy #3, although back then we didn’t know until the delivery. Tupperware was a big thing back in the day. If you wanted the best storage containers for your staples, so the brown sugar wouldn’t get hard, and flour would never see little bugs crawling in it, you needed Tupperware. If you wanted truly leakproof containers, any round Tupperware container would do the job. All their containers were airtight, so it kept your food fresh. Back in those days all Tupperware had a lifetime warranty. If it cracked, chipped, or peeled, Tupperware would replace that piece regardless of its age.

The favorite party that I did was to make a pie crust in a Tupperware mixing bowl, in the middle of someone’s living room without making a mess. I had the flour and salt pre-measured in the mixing bowl. I had the shortening in a separate (Tupperware, of course) container. I would take a knife and proceed to cut small portions of shortening and drop into the flour mixture until I had all the shortening added to the bowl. I closed the bowl by attaching the “seal.” That’s right, NEVER call a lid a lid. In Tupperware, it was ALWAYS a seal. Why? Because it was airtight, and if round, 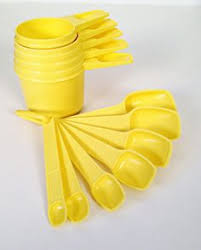 also watertight. Once the seal was on and burped, I held the bowl sideways and starting shaking up and down. It was hard to chat while doing this, and it also doesn’t get my point across, so I handed the bowl to the closest person and told her to start shaking, and when she was tired of it, pass it to the next person until it went around the room. As they were doing that, I talked about the great measuring cups and measuring spoons that I used in measuring the ingredients. Tupperware was the first to have a six cup measuring set, and the same for the measuring spoons. Now the bowl, had made it around the room. I set the bowl on the table and carefully opened the seal and showed the group that the shortening and flour has combined into little pieces just like you had used a pastry blender. They seemed 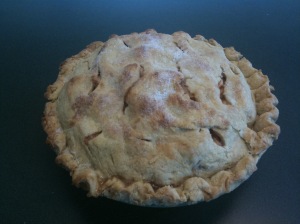 pretty amazed. Then I used the only ingredient that I asked the hostess to provide—cold water! I added the measured cold water to the bowl, sealed it once again, and passed it around the room and told them to start shaking again. During this time I was also telling about the bowls, seals, and who knows what else until everyone all of a sudden realized they were hearing a thumping sound from the bowl they were passing around. I retrieved the bowl, opened the seal, and showed everyone that the pie dough was in a nice round ball ready for rolling into a pie crust. To top this off, I had baked a pie at home that day, and brought it to the party so they saw the finished product. My family didn’t get a pie that day, but they got one the next day with the dough I made at the party, or sometimes, I gave the hostess the dough that she could roll out to a pie the next day. To say the least, my little Tupperware cash register started ringing and ringing. I sold a ton of mixing bowls, measuring spoons, and measuring cups.

I think about this and how fun it was to do. I also remember terrible parties where I just wanted to pack my case and go home. I once did a party with about ten middle age women who were what I would call upper-middle class. They watched the demonstration, and then this lady blares out, “I have gone 20 years without Tupperware, I think I can go another 20 years.” At that point, this mid-20’s Tupperware lady saw all the other ladies nod their heads and put down their order forms. To counter that, I also did a party for a hostess who asked to have a party because she had a special dinner at her home where a professional chef came to prepare the meal, and he asked her for her Tupperware to store some of these ingredients, and she had none. She and her friends, who had no problem buying anything they wanted, proceeded to purchase a great quantity of Tupperware storage items.

I became adept at parties for fund raisers. That became my specialty. Back in those days every small community around St. Louis had a little community newspaper that told the news of PTA groups, church groups, and any other type of organization. These articles or photo ops always listed the name of the organizer. It just took a simple phone call, and I set up for them to have a Tupperware party as a fundraiser. The advantage for me was I sold a larger quantity at one time, so I could do less parties as a young mom, and still make good money.

In the summer of 1976, I had recruited enough others to sell Tupperware that I was promoted to a manager. My sales unit was named “Top Bananas.” I actually turned down the manager position at first because I had found out that I was pregnant with my third child. I told our distributor that with two toddlers at home and now pregnant with another, I could not work the full time hours that was required for this job. Cleo was disappointed

but not phased. She needed me for her recognition of promoting 20 new managers at the annual sales Jubilee in Orlando. She said I didn’t have work full time, if I would still accept the position. Why, of course. Let’s see, they handed me a blue Ford station wagon, which I had to only pay $10 per month that covered all insurance for me and my husband’s personal use.  It was a great vehicle for delivery all the Tupperware orders to the hostess (not done this way any longer).  I think I can do that! I also got a small override on my team member’s sales. I did this until I was about 8 months pregnant, and then I resigned completely from my job. I wanted to be with my three babies. It was a good ride. I made nice money—more than I would make working part time at a retailer, I set my hours, and I filled my kitchen with great products at a huge discount.

Today, we stopped at the Tupperware headquarters. They have a small store where you can purchase products, and a small area where they have a display of the “old” stuff. What a disappointment. I asked about the warranty on one of their products. The warranty has changed for some of the products, and this one was not one of the plastics, and she couldn’t really tell me. First she said 10 years, then limited lifetime, and when I said those were two different things, she went back to 10 years. Either people today are not trained well enough, or they just don’t care.  I am sure that’s not true for all their employees, but as the representative for this company, you would think they would be more engaged. What I consider the best of their products are no longer available. I can only think it is because people don’t cook today like we did back in the day.

It was nice to stop by there today to bring back some memories of a period in my life that I kind of forgot about. It was fun to be standing at a place where 40+ years ago was rewarding my sales skills. I shook the hand of the president of Tupperware at that time. I was promoted in front of thousands of successful Tupperware sales people. It was also sad to see that this place was not the same. It still is a beautiful campus, but he rose garden is gone. The auditorium is gone. It’s now just another corporate office. It didn’t even seem connected to its own history besides a small room of some of the old Tupperware. I am glad that I got to remember my sales career, the people’s homes I visited to have fun at a Tupperware party, and remembering that I was successful at this endeavor. The visit was bittersweet, because nothing stays the same.

A few things that they still have that I was glad to see:

Shape-O Ball – Although not a storage or cooking item  This ball is a classic toy that has been around since the mid 60’s.  Other toy companies have made shape toys, but this is the gold standard.

Modular Mates – Best canister storage available.  They come in various sizes.  I use these for my flour, sugar, brown sugar, and powdered sugar.  They are square and rectangular and take up less room in your cabinets.

Bell Tumblers – Everyone with little kids needs these.  They are the right size for little hands.  They have a non-slip outer surface, and they are happy colors!

Tupper Minis – They were  called 2 oz. midgets back in the day—I guess that’s not PC anymore—best tiny storage for little snacks like raisins, M&M’s for little folks—meaning children.

My favorite party prizes that I don’t know if one can get any longer:

Citrus Peeler – Actually Crate and Barrel has a similar one.

Egg separator – best one ever, and the little groove on the handle was to hook onto a Tupperware container.

Rocker Scoop – So glad I still have them in my flour and sugar canisters—doesn’t have a handle and can be squeezed to pour into something narrow.

Once again, I am grateful for this experience I had in sales and home parties.  As I look back on it, I realize it helped shape my future in being comfortable in front of groups for training presentations, and how to sell ideas.  Everything has a purpose, that we may not see while in the thick of things.  Think back on your past–what things did you do that you didn’t think was significant but actually groomed you for the future?