My paternal grandfather was a prisoner of war in Russia during World War I.  He came to the United States when he was 15 years old to escort his older sister who was coming to St. Louis to work as a domestic.  On a side note, she married quite well, and I am sure had a few domestics in her household.

Back to Grandpa.  Mathias Nothum was born in 1891.  He was German and was born in a German village in Hungary, which after World War I, became part of Romania.  Because of where he lived and where he traveled, he spoke German, Romanian, Hungarian, English, and Russian.  Russian?  Where does that fit?  Keep reading . . . .

Mathias came back to his home in Romania after settling his sister, Marie, in America.  He was drafted into the army (I suppose the Hungarian army) and was captured by the Russians.  He escaped the prison and made his way home.  It’s an interesting story that was not well known in the family.  Fortunately, my aunt, his only daughter after having 7 sons, recorded this part of his life.  For years he never talked about this experience, and finally his daughter got him to tell the story. 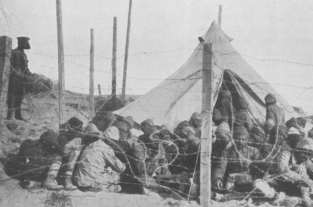 I am assuming he was a prisoner of war for several years, since he learned to speak Russian.  The first prison he was sent to was not too bad, but they later moved him to another prison where the accommodations and treatment had much to be desired.  He was fed watered down soup and occasionally it had a few potatoes in the soup.  Sometimes he was fed a watered down borsch and a piece of moldy bread.  The prisoners ate only once a day.

While in prison, he met a German prisoner and they became friends.  Daily they worked in the potato or beet fields along with the Russian women working in the fields.  They

worked from morning until sunset.  Mathias and his new friend began discussing the idea of escaping.  The prisoners were getting sick and dying, and they concluded they would either die of starvation or from escaping.  They decided they preferred the quick death from the bullet.

Mathias befriended a nurse who would come to visit the prisoners, who were getting sick, to check on their health.  I am sure this nurse was smitten this handsome young man, who I assume was in his early twenties.  He told the nurse that he and his friend wanted to escape.

One day the nurse showed up with some women’s clothing.  The plan was that he and his friend were to work in the fields along side the Russian women.  They would blend in with the women in the dresses and babushkas.  For those of you who do not know what a babushka is, it is a headscarf.  They wore layers of clothing so they would appear large like the women, rather than starving prisoners.  When evening came, the women stopped work and headed toward their village.  Mathias and his friend laid down between the rows of potatoes and waited until dark.  The nurse kept the Russian guards occupied until all the women had left the fields.  I must say, she must have been a pretty young lady to be able to keep the attention of the guards.  Mathias and his friend actually thought the plan would fail, but they were desperate.  At this point, there was no turning back.

When it got dark, the two slithered out on their elbows and knees all night.  They ate mainly raw beets and occasionally potatoes, when they could find them.  They would rub the dirt off with their shirts and eat, and after a while, they didn’t even care about the dirt.  They would pick the beets, and eat them as quickly as they could, dirt and all.  At day break they would stop and take turns sleeping while the other was on watch of being discovered.  When it got dark again, they would continue to crawl their way out.

One night, as they were crawling, they saw a light in the distance and realized it was a house.  They figured that they were far away enough from the prison, that they would take their chances.  They crawled as fast as they could to the house, and saw the candle at an open window.  They decided to sit under the window and converse in German.  They were hoping that if the folks residing in the house were German, they would be invited in.  If these folks were not German, they figured they would be shot on the spot, or the Russian authorities would be called and they would be executed.  Either way, they took the chance they might be killed.  They were just took weak and too hungry to care.  They just wanted this to be over.

As they began talking, someone in the home blew out the candle, and then proceeded to say in German, “Who are you?”  Upon answering they were escorted into the house.  The

people in this home were bakers, and they were served as much fresh bread and wine as Mathias and his friend could eat and drink.

What border you ask?  We have no idea.  As my aunt is hearing this story, she was so glad her dad is telling her finally about this experience, she doesn’t ask further questions, that she thinks about today.

Here is what I do know.  Mathias was a barber in Romania.  He married my grandmother, Barbara Ludwig, in February 1919.  There was a woman who lived in the same village as Barbara’s grandparents.  She was a matchmaker.  She knew the Nothum family who lived in the neighboring village of Sekeschut.  This village was in Hungary until after World War I, which it was now in Romania.  She told the family that the Nothum family, from the neighboring village, had  a good looking son, Mathias, who had recently returned from the war.  This matchmaker also told Mathias about a pretty young woman name Barbara Ludwig, who lived in the village of Deutsch Sankt Peter, Romania (which was also Hungary before the war).  Both families were German.  Mathias was 27 years old, and Barbara was just short of 19 years old when they married.

As I write this, I realize that Mathias had gone to the US with his sister when he was 15 years old.  He must have spent some time in St. Louis before returning and being drafted into the war.  The matchmaker said, according to the account by my grandmother, that Mathias had recently returned from the war.  The war was not over when he escaped.  The war ended in 1918.  He probably was home a year or two (just speculation) in order to become healthy again and be able to marry.

Mathias went back to the United States and settled in St. Louis, Missouri, where he worked as a barber, and prepared a home for Barbara and his children.  She and their 4 sons originally were to come in 1929, but the quota was filled for those coming from Romania, so they had to wait a year.  Apparently, Mathias returned home to visit, because when she set sail with her children in December of 1930, she now had five little boys.  The family would continue to grow in the United States.  They had two more sons, and then a set of twin girls who died at birth.  About 18 months later, they finished their family with their daughter, Barbara.

My family history shows motivation and dedication.  In the past, and currently, this family works through adversity.  They work hard and they love hard.  Most of the brothers served in the US military, became entrepreneurs, starting small businesses, and seeing these businesses pass on to their children, and grandchildren also being entrepreneurs.  It is an amazing family, of which I am proud to be a part.

If you don’t know your family history, take time to interview your parents, grandparents, aunts and uncles.  I guarantee that you also have a rich history.  Write it down so the next generations will know their roots.  No family is perfect. All families have had good things and bad things, and it has, hopefully, strengthened them.  It makes us who we are today.