This past Sunday my mother-in-law, Alberta, turned 100 years old!  I’m impressed.  She was two weeks older than my mom—my mom would have been 100 years old this year, but she passed away 23 years ago.  Both women lived most of their lives is Missouri, my mom raised in the St. Louis area, and Alberta, in the Kansas City area.  Although they were born 13 days apart, their lives were extremely different as Kansas City and St. Louis are on the opposite sides of the state.  My mom (Dorothy) was a first generation American.  My mom was educated until she reached the 8th grade.  Alberta was an all-American girl who went to high school, and lived a very middle class life.

Alberta was born in Creston, Iowa on November 4, 1918.  Her father, Paul Allen, worked for the Chicago, Burlington & Quincy Railroad, and her mother was a homemaker.  Alberta was the younger of two daughters. 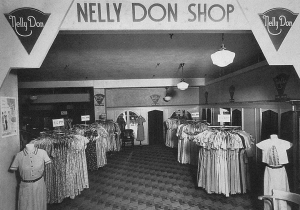 Her mother was enamored with Hollywood, and as Alberta was growing up in Kansas City, MO, she became a model for the local department stores and other businesses.  As a teenager, Alberta modeled for Nelly Don women’s clothing, one the of largest and most successful women’s clothes designer in the United States, headquartered in Kansas City.  She modeled for several different businesses, and beauty contests. 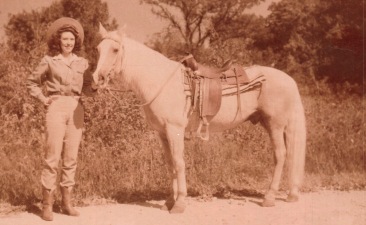 Alberta talks about being poor when she was young, but from my perspective, she was far from poor.  Her father worked for the railroad and during the depression, he couldn’t cash his paycheck because the Kansas City bank didn’t have enough cash to cover it.  She also had a horse, Gold Dust Tony, when she was a teen.  I am not sure who she was comparing herself to, but she was one of the fortunate comfortable people during the depression. 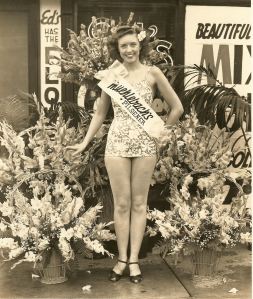 When World War II broke out, Alberta took a job in a munitions factory.  There she met her future husband, William R. Walker.  W.R. was a few years younger than Alberta, and I suppose, that was a thing back in those days, so for years, Alberta lied about her age, so that W.R.’s family would not be aware that

she was older than him.  When she had her first child, my husband Dennis, she quit working and became a stay at home mother.  W.R. was a salesman, and had a tendency to look for greener pastures, so the 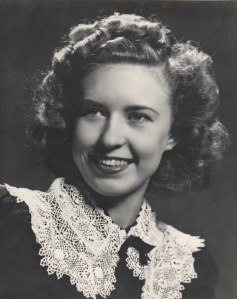 family relocated several times, living in Memphis, Tennessee to Wisconsin, before coming back to Chillicothe, Missouri years late to live the rest of their years.

Alberta was a very put-together woman.  From the time she was young, she got up every morning, made sure her hair and make up was done to perfection.  She said she earned many modeling jobs because she was

To be perfectly honest, I felt in bit intimidated by her when I first met her.  She was 94 years old, and looked fabulous.  She was dressed to the nines, and would comment how she ran into an old friend, and then she might make a comment about how they let themselves go.   Being a girl who has had to deal with weight issues my whole life, I felt like she was

judging my looks.  I have over time gotten over that, but at the beginning it was uncomfortable.

Alberta and W.R. had three children, Dennis who was born in 1946, and twins William (Bill) and David who were born in 1949.  She raised her boys to be respectful men, to treat everyone well, especially their wives.

Their lives were chaotic as they moved from Missouri to Tennessee, and then Wisconsin.  They came back to Missouri when W.R. decided to take over the family farm.  Along with her husband and boys, Alberta helped in all the farming endeavors.  She ran tractors, grain trucks, and did whatever was necessary to make this farm work for the family.  She still owns the farm today, although none of the Walkers are farming it.  All her children have their college educations and have been in professional positions.  The farm is now rented out by a local farmer who raises crops on the land. this has allowed Alberta to have a nice little income in her later years.   While Alberta was working on the farm, she was also the Acting Superintendent at the Chillicothe Industrial School for Girls in Chillicothe, MO, a treatment center for delinquent girls.  Alberta worked the farm in the morning, made the lunch for the family, took a shower, and drove off to her evening job.  She worked with and counseled girls who had gotten in trouble with the law.  She was a no-nonsense counselor and helped many girls get their lives back on track. 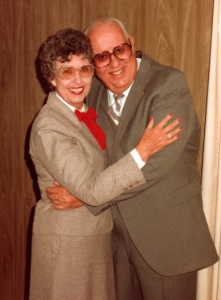 W.R. passed away suddenly in 1988 from an aneurysm.  He was the love of Alberta’s life.  She was 70, and has lived these 30 years without him.  A few years later Alberta decided to leave the farm and move into town.  Being in her 70’s didn’t stop her from being the strong, creative women she had always been.  She found a builder and along with him, helped design and build her new home in Chillicothe.  She lived in that home until 2014 when she came to Columbia, MO, to live in an assisted living facility near two of her sons.  She traveled the world with girlfriends who were much younger and had a harder time keeping up with her.  She has outlived most of these friends.  She has traveled all over Europe, Australia, and New Zealand.

When Alberta turned 90 years old, she hosted her three sons and their wives, to a week in Mexico to celebrate.  She was still very active.  A newspaper photo in the Chillicothe paper showed the 90 year old working out at the gym.

When Alberta was 92, she would drive from Chillicothe, MO to Trenton, MO to attend church services.  She decided to add a little excitement to her life, and pushed down on the accelerator to 89 mph.  Out of nowhere came the local law enforcement and pulled her over.  The officer asked her if she knew how fast she was driving.  She said she did.  Then he asked her why she was in such a hurry.  She stated to him that at her age there weren’t a lot of exciting thing to do.  The officer proceeded to give her a speeding ticket.  Alberta decided to keep this a secret, but much to her surprise the following Sunday, all her friends at church knew about the ticket because the small town of Chillicothe, Missouri, publishes all tickets given in the local newspaper.  Busted!

In 2014 Alberta moved from Chillicothe to Columbia to live in an assisted living facility.  She has had a few medical set backs, but she seems to bounce back.  in 2016, she took a bad fall, that caused major bruising down the whole side of her body and a brain bleed.  That isn’t enough to get to Alberta.  After a few weeks of therapy, she was back to her old self.  She is one amazing and tough woman.

Alberta has been living in a skilled care facility for the last few months.  Her mind is sharp as ever, but her body is slowing down.  She loves to be surrounded by her family and friends.  Her 100th birthday celebration brought out family and friends from her lifetime.  The nursing home also gave her a party where she danced with her physical therapist.