Disclaimer:  I don’t know anything about hockey.  I am not a fan of hockey. 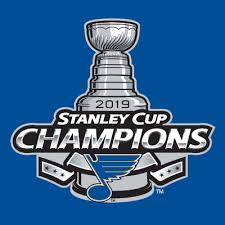 Now that you know that I know nothing about the sport, I want you to know that I am beyond thrilled that the St. Louis Blues Hockey team just won the Stanley Cup.  I am a fair weather fan, I suppose.  But, it’s not even that.  I am a fan of the area of the country where I grew up.  I was born in St. Louis, Missouri.  Although, I didn’t live in the actual city of St. Louis (except for my first six months of life), I lived in the suburbs, my answer to the question of where do you live, was always St. Louis, Missouri.

There is something about the people of St. Louis.  They are great sports fans.  They will follow their teams through thick and thin.  St. Louis people are also friendly.  Just go take

a walk, and don’t be surprised if several people you pass, will tell you hello or nod their head with a smile.  It’s just who we are.

Another funny thing about being from the St. Louis area, is the question asked to anyone we hear is from the area, “Where did you go to high school?”  Now, some people said it was to profile, and I don’t believe that.  I asked the question because I was curious if we might know the same people, or something about where we live.  An example of that was a couple years ago when I took three of my grandchildren on vacation, and we were going into the entrance of “The World of Coca-Cola” in Atlanta, Georgia.  My grandson had a “Mizzou” tee shirt on.  Mizzou is the nickname for the University of Missouri.  The young man at the gate immediately said, “You are from Missouri!  Where?”  I told him we were from St. Louis.  He asked my grandson where he went to high school, and looked a little disappointed that he did not relate to his or my granddaughter’s high school.  I asked him where he went to high school, and he told me “Kirkwood.”  At that, I said, “Well I went to Lindbergh.”  Those are two neighboring school districts.  I smiled at this young African-American man, and said, “We are neighbors!”  At that we both smiled at each other, and gave each other hugs.  We became neighbors again.  You could tell his eyes lit up, and he had a connection to home.  He sent us to where we were to wait to enter, and when we arrived at our spot, we realized my new neighbor put us in front of all the people in the line.  Why?  Because we were all St. Louisians.  We were neighbors.  We were instant friends.  That is what St. Louis is about.

So, back to hockey.  While we were in Arizona, the St. Louis Blues were somehow pushing their way to the playoffs.  I don’t follow the sport, but I have some Facebook friends who do.  I also have a friend and former colleague, who is the VP of Human Resources for the St. Louis Blues.  She has a pretty nifty job!  I’m seeing that this team is moving its way up.

I think of the one and only time I attended a Blues hockey game.  It was sometime in the early 1970’s.  My dad was a building contractor in St. Louis, and businesses would gift

him with tickets to sporting events.  My dad did not like sports of any kind, so usually we got his baseball, football, and hockey tickets.  My ex-husband, when we were newlyweds knew as much about hockey as I did, but we got free tickets.  Since we were poor newlyweds, we were happy to attend the game.  I realized that we knew nothing about the game when everyone got up and left after the “third quarter.”  Haha!  We thought the game was like football, have four quarters, instead of three periods.  I still remember seeing the teams leave the ice and the crowd getting up and leaving, and our surprised expressions that they were leaving before the game was over.  Fortunately, we weren’t with anyone who knew us who could remind us forever how ignorant we were of the sport!

I have followed baseball for a long time.  I understand the sport, the Cardinals are my favorite team forever, and I am a fan during good seasons and bad.  Fortunately, the Cardinals have done their fair share of winning playoffs and world series.  We are second only to winning the most series behind the Yankees.  I followed the Rams football team when they were in St. Louis for their short tenure, and still remember watching their Super Bowl win with my favorite, quarterback, Curt Warner.  But, hockey, I just don’t know.

We have been without cable television since we left Arizona in early May.  There we have a “snowbird” plan, so we have internet there all year, so we can monitor our home

for security and our thermostat, but we only have cable during the “snowbird” time, which is the winter.  When we came back to Missouri, we checked with the cable company to get a plan that covered the time in Missouri.  Yeah, they aren’t as flexible.  They wanted to lock us into a two year contract, and no, it was pay for it even when you don’t live here, so we declined the cable.  We have plenty of entertainment with our television without cable—we have Apple TV for new movies, Netflix, PrimeTV, and Hulu.

Now the Blues have gone into the final playoffs, and as a native of St. Louis, it is now important that I support the team, and the city and the community I will always love.  We were actually in Arizona for a week, but being summer and with our “snowbird” plan, we don’t have cable.  Simple solution, find the sports bars that are showing the games.  That worked.  We got dinner, and watched the game, and enjoyed that.  We were hoping they would win the cup on Sunday, June 9, because we were flying home on

Tuesday, June 11.  Well, that didn’t happen.  Now we are back in Missouri, in our small town, and there is one more game to go.  The Blues and the Bruins are tied 3 games each, and whoever wins this last game wins the Stanley Cup.

On top of all of this, while we were in Arizona, we both got sick.  Our original flight home was supposed to be Saturday, the 8th, but the doctor there suggested we change our flight plans to a later date in order to get well.  The airlines graciously changed our flight and even gave us a direct flight so we could have a shorter trip on on Tuesday.  We are feeling better, but not totally well.  Yeah, cabin pressure taking off and landing can play havoc with your ears when you are not feeling well.  By the time we landed in St. Louis, and was driving our 90 minute drive home, neither of us could hear each other.

Wednesday is the the day of the last game.  We only know of good sports bars in Columbia (a college town about 30 miles from us), and neither of us are up for that.  Then we realized, our local diner had televisions, so we asked them if they would air the game.  They were gracious and said that absolutely they would put it on their televisions for us.  So, we had a 7:00 pm dinner at the diner, and we sat in front of the television.  There was no sound, and we didn’t need any.  Following that puck its tough. Those players move so fast, and that puck goes between those teams lickety-split.  We were cheering the team on as we ate our diner food.  Then we realized that the diner closed at 9:00 pm, and the game would probably go longer.  I had a sudden idea, that I could find the game on my phone on one of the sports apps, and stream it to our television.  I found the NBC Sports app, and sure enough, it would allow us to watch for free for 44 minutes!  Okay, so far, so good.

We are home now, watching the game, and my time is running out, so Dennis downloads the same app on his phone, and he gets some free time, and then it runs out.  I grab my laptop to find that NBC Sports does not have an app for the computer so I tell Dennis to grab his iPad.  He gets the iPad, and in the minutes, that I am loading the app, he looks at the notification on his Apple watch, and says that the Blues just won!  We miss the final buzzer!  Haha!  I got he app going to watch the presentation of the Stanley cup.

You would have thought we were die hard fans the way we acted that evening.   I still can’t tell you much about how the game is played.  All I needed to know is that they had to get the puck in that net behind that goalie!  That was good enough to enjoy my home town’s very first Stanley Cup win.

The St. Louis Blues started the season in last place.  They made their way to the finals and ended up being the best team this year.  The team also invited a young lady to their last game who was a huge fan of theirs.  She is eleven years old, and is fighting cancer.  They flew her to Boston for the game.  She was interviewed by several news outlets, and she said that the Blues never gave up, and they inspire her to never give up.  I think she has it backwards, she has never given up, and the Blues were inspired by her.  She was even out on the ice with the team after the game.

There are lessons to be learned from a contest of a sport that I know basically nothing about:

Never give up – How many times do we give up when we think it looks so bleak?  I mean, the blues were in last place, but they just plugged away.  I remember a few years ago when the Cardinals won the world series, the August before that event they were 15 games behind the leading team.  They don’t give up.  They just plug away, and sometimes it brings the greatest rewards.  We need to remember this–don’t get discouraged when behind.  Just keep plugging away–keep trying–keep working–keep improving.  The reward may be more than you ever imagined.

People rally together – A whole town — a whole region came together.  I know they weren’t originally all hockey fans.  People in St. Louis gathered and watched the game in the streets downtown.  While the team was in Boston the night of the final game, the Enterprise Center, where the team plays in St. Louis, was filled to watch on big screen televisions.  The Cardinals were playing out of town, and St. Louis also filled Bush Stadium to watch the game on big screen televisions.  Of course, people are always looking for a good excuse to party, but nobody does it better than St. Louis.

No one turned over a car or caught anything fire! – I am always amazed when I watch news reports of a town that had a winning team, and the people almost riot rather than celebrate.  As much bad publicity that St. Louis gets for being such a violent town, we do not see that behavior when our town is winning.  St. Louis people, on the whole, are really good people, and they celebrate, not destroy.

Here is a video I found on YouTube of the crowd at Busch Stadium in the last minutes of the final game–who fills a stadium like that?  Only St. Louis!