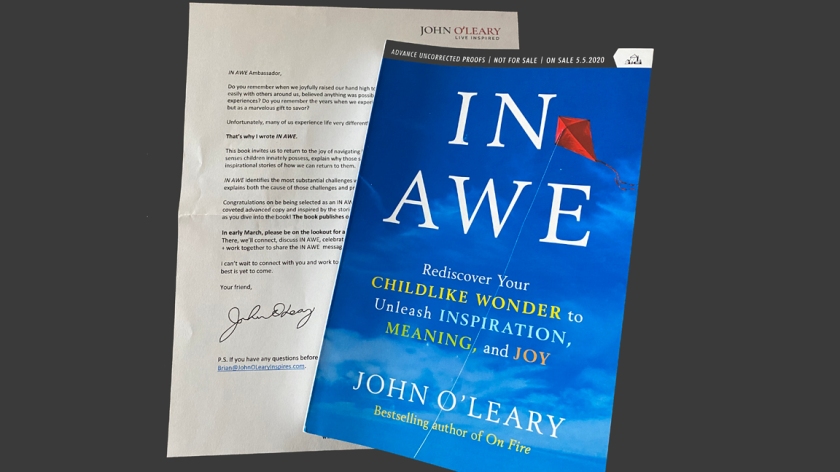 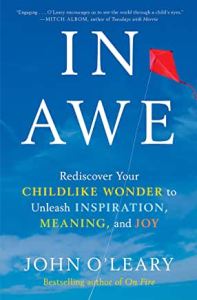 Today is a special day for my friend and author, John O’Leary.  His 2nd book, “In Awe” hits the bookstore shelves.  Well, okay, most bookstores are closed due to the Corona Virus Pandemic, but his book was released today and is available easily through Amazon.

I met John ten years ago this spring.  He was speaking to a small group of business people, and I was among the approximately 30 folks there to hear him. I had never heard of John.  He had no books published, and he was just starting out speaking to groups.  This was a small one in comparison to what he does today.  After he spoke, I hung around and chatted with him.  His story touched my heart in many ways.  When he asked us who we would be “Jack” for, I knew immediately who I wanted to reach out to, even if it was just small things.  I had someone in mind who I knew was going through a struggle at the time.  (I will explain who “Jack” is below).

For those of you not familiar with John, I will give a very brief history of what I know.  When he was nine years old, one Saturday morning, while his mom and dad were out, and teenage brother and other siblings home, John decided to go into the garage and experiment with a piece of paper lit on fire and a five gallon container of gasoline.  To say the least, that is a bad combination.  He didn’t cause a little fire, he caused a major explosion, setting the house on fire, but worst of all, setting himself on fire.  He was burned so badly, he was not expected to live through that night.  He had a less than 1% chance.  Now, that’s some really bad odds.

John had come from a wonderful family, and the strength of his parents, and the kindness of strangers, especially Jack Buck, helped John to recover.  Jack Buck was the sportscaster for the St. Louis Cardinals baseball team.  His voice is well known over the radio broadcasting play by play, and John was no stranger to that voice.  Although, John was completely bandaged up in the burn unit of the hospital, he recognized that voice, and the encouragement that Jack Buck gave him.

John did recover, but not without many surgeries and scars.  He spent five months in the hospital.  His family stayed elsewhere while their house had to be rebuilt.  John being in our presence is proof that there are still miracles among us.

Ten years ago, when he was starting out his speaking, he was also leading executive workshops.  I was invited to assist him in one of these workshops.  There were two things we did that really changed my direction in life.  The first was that John had us all write our “Ignition Statement” and our “Life Vision” which was actually writing our personal mission statement.  He shared his with us, and helped us all work through writing the thing that really sets us on fire.  Here is what I wrote that day, and still read it today:

My Ignition Statement:  I want to enjoy each day to the fullest, show love to others, be a light to those who want direction, accepting others where they are, being their cheerleader, showing passion, forgiveness, love and connection.

My Life Vision:  To let others know they are not alone in their challenges, they have value and worth and a voice.  I want to be surrounded by those I love and enjoy the grace of their love to reach out and share it with others.

The other thing that John encouraged us to do at this workshop was to set up a Personal Board of Directors.  Wow!  What a crazy idea.  He suggested we find folks we like and respect and ask them to sit on our board, so they we are accountable for the bigger life we wanted to lead.  He said not to be afraid to ask people, even busy people.  I made my list of some personal friends, some close business colleagues, and I added John.  He kindly accepted, and he along with five other folks received a weekly email from me.  The email stated my Ignition Statement and Life Vision at the top.  Then for almost two years I wrote and shared what I was doing that week to live these statements to John and five other of my personal board of directors.  I still have those emails, and I still have the email replies from John who was always encouraging me to keep going and meet the challenges I set before me.  I just took a look, and saw one I wrote shortly after my sister died from a short and fast battle with cancer.  Today as I read John response, it brought tears to my eyes.  John always responded to my board reports, and I am so grateful for almost two years he took the time to read and respond.

Fast forward a few years.  John has written a book about the day he was burned and his recovery.  I was so happy for John that he was able to put this amazing book together.  I had preordered the book and it arrived in our mailbox as we were pulling out of the driveway and driving into St. Louis.  I started reading the book out loud to Dennis as we were driving down the interstate.  I don’t remember the exact part, but early in the book, you see the strength and determination of John’s mother in his recovery.  I am reading this passage to Dennis, but am having trouble because I am crying, and I turn to tell Dennis that I’m sorry I am having trouble getting the words out.  There was my sweet husband driving down the road, with big alligator tears coming down also.  I then realized that we would read the book when his driving abilities were not needed.  We attended John’s book launch party in March of 2016. 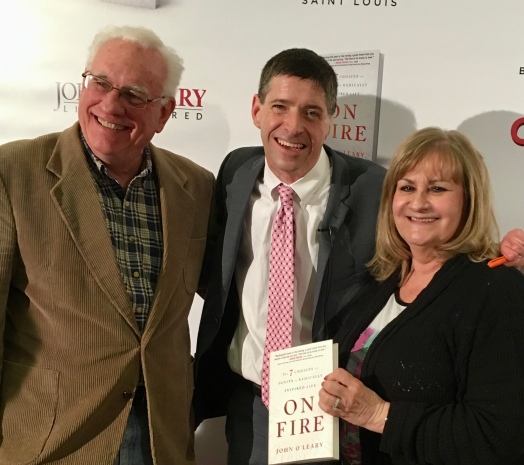 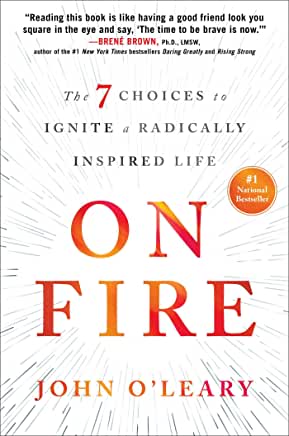 Today, John’s 2nd book has come out.  It is trending on Amazon.  I was privileged to be an “In Awe Ambassador” and received an advance copy of the book.  The last few weeks we had Facebook Live meetings with John discussing the book, and our last meeting was a Zoom meeting where we could see the other “in Awe Ambassadors.”  This book is a gem.  If you want to feel hope, there is no better time than during this pandemic to read “In Awe.”  We were in awe as children, and then as we grew older, we just totally forget how to be in awe of the life we were given and those around us.  John reminds us all that we can still be in awe of life.  His book is filled with stories from his life where he has learned to be in awe.  His four beautiful children have reminded him and us of all we can be grateful for, and knowing that “the best is yet to come.”

Today the book launched quietly, or so John thought.  Then he went outside his office, and there was all his staff (safely distanced) with a champagne party and these adorable “In Awe” cookies! 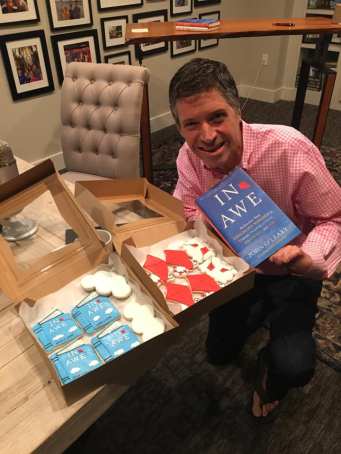 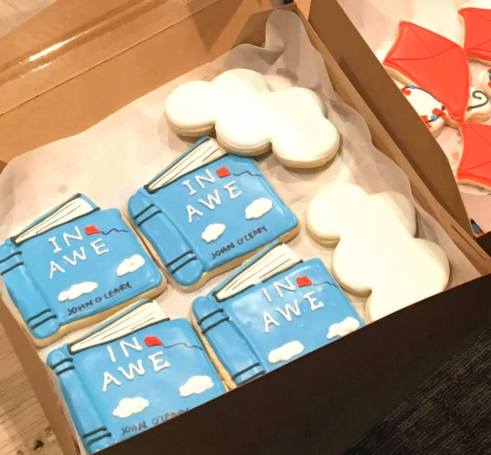 John O’Leary, I am so glad I got to meet you in that small little meeting on the campus of Lindenwood University.  I am grateful for the friendship we have had over the years, and how you have continued inspired me.