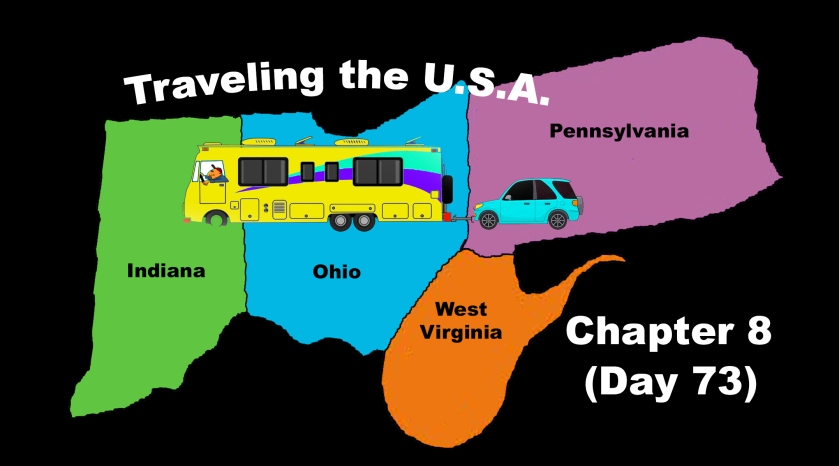 We are on day 73 of our RV travels.  We have crossed over the half way point.  Our goal is to return to our home on September 18.  We have had a very busy time since my last blog.

After we left Natural Bridge, Virginia, we drove to Martinsburg, West Virginia.  My sister lives in nearby Ranson, so our RV campsite was just down the road.  We planned to stay several days visiting with her.  Because we have already gone sightseeing in her area, we didn’t do that this time.  If you are ever in this area, though, you must go to Harper’s Ferry.  That is where John Brown led an insurrection during the civil war.  He was caught and hanged in Charles Town, West Virginia, which is just down the road.  It is named Charles Town because the area was once owned by Charles Washington, George’s brother.  There are a lot of historic homes around, and it is also an easy drive to such places as Mount Vernon, Antietam Battlefield, and even Washington D. C.

While visiting with my sister, her teenage granddaughters spent a lot of time with us.  We did a lot of card playing and some dominoes.  We ate a lot of good food and ice cream!  We had such a fun time with them.  The 4th of July was spent at my sister’s son and daughter-in-law’s home.  There was enough food for an army, and we had fun sitting outdoors watching their five children swim.  As the evening came, we were playing cards again, and then the fireworks started.  I thought we would see a couple little things in the air, but my goodness, the neighbors in this place go big or go home.  Oh yeah, they were home and still went big.  The neighbor directly behind had an arsenal of large amazing fireworks, and I was well entertained.  I taught the kids how to whoop and holler when the explosion occurs and the sky is lit up.

After our days there, we took a short drive to Gettysburg, Pennsylvania.  Because of the heat and humidity, we opted to do our own car tour.  It is one you purchase a ticket for the car tour, it gives you a link to a sight that narrates the tour.  They tell you not to drive over 25 mph or you will not hear everything.  There were markers on the road, and as you drove past them, the next narration would turn on.   The Gettysburg Battlefield was not like I expected.  It was several miles.  It was huge and the terrain was different, from open fields, to wheat fields, to heavy wooded areas.  The battle lasted the first three days in July and it was hot.  The army’s uniforms back in those day were wool.  I cannot even begin to imagine the discomfort they had just being in those uniforms.  The terrain was also a challenge.  Some got hung up going through the woods, some got hung up trying to navigate in the wheat fields, and some came out of the woods and found they were in the middle of a valley with the enemy surrounding them above.  War is not pretty, and this battle ground was deadly.  It is a place to honor and respect all those who lost their lives, no matter what side they were on.  They were all human beings, and young ones at that.  It was a sobering experience viewing this battlefield.

Leaving Gettysburg, we took another short drive to Lancaster, Pennsylvania.  When you are a newbie at RV parks, reservations are made where you can find a place, and not always the most suitable for this aging couple.  Our park, we discovered, was part of an amusement park.  We were far enough away not to hear the noise.  All their spots were back-ins, which means we have to disconnect the car first.  This back-in gave me heart palpitations.  It was a downhill back-in that had like a four foot drop at the end, where another RV was parked.  My brain always goes to worst case scenarios, so I envisioned just backing off this little cliff.  I stood in the back corner because Dennis needed to get back far enough to get to the sewer, water, and electric connections which were near the back end of this slot.  His expert driving got us there, and we were good for several days.

Our first day, last Friday, we had reservations for Sight & Sound Theater.  We had attended the only other Sight & Sound Theater earlier in the trip in Branson, Missouri.  In Branson, we saw the production of “Jesus,” and in Lancaster we saw “Queen Esther.”  This theater is also a must-see if you ever get to one of these two cities.  The stage sets rival anything done on Broadway.  All their show have live animals, horses, llamas, sheep, pigs, whatever animal may have been at the location where the story takes place.  All the shows are retelling of a biblical story.  As we walked out of the theater in Lancaster, we noticed the clouds coming in with threatening weather.  We found a place to eat, and arrived just as the rain started.  It poured, and by the time we were finished eating, it was pretty much over, and we could drive back to our RV in good weather.  (You may notice in my photos of our trips, I love capturing the clouds).

Saturday we had no special plans other than get the laundry done.  Our RV park did not have a very nice laundry area, so Dennis drove to one in town and did the laundry at a laundromat, while I cleaned the RV interior.  It is a home and needs cleaning.  When our housework was completed, we decided to go to one of the Amish stores.  Good thing we did.  We knew they would be closed on Sunday, but they are also closed on Monday.  It makes sense.  Their Sunday Sabbath is important, so they are not going to do any work that day, but they probably need Monday to do the things they need to do at home.  I mean, they don’t have electric washers and dryers to pop their clothes in when they get home from work while putting dinner on the table.

We woke up bright and early Sunday and got in the car and headed to Philadelphia.  We had tickets for the Mutter Museum for a 10:00 a.m. entrance. I have always been curious about this medical museum, and now was my time to see it.  The museum is not as large as I thought it would be.  They are allowing more people to attend, but it was crowded in there.  There are a lot of human specimens there, and therefore, no photo taking in these areas because these were human beings, and respect must be shown.  There is only one skull that is in a room that allowed photos. There is a room with an exhibit on the 1918 Spanish Flu, which was planned before the Covid pandemic hit. If you recall, the Spanish Flu hit Philadelphia with a vengeance after they had a large military parade to honor their servicemen from World War 1. There was also a special exhibit about Madame Curie and her discovery of radium, which at first, the medical community thought was harmless. If you have not yet read the book, “Radium Girls,” I highly recommend it. It is a shocking true story about young women hired to paint clock dials with radium so they could glow in the dark.

After we left the museum, we checked our map on our phone to see how far it was to walk to Independence Hall and the Liberty Bell.  It was only a mile and a half, so we decided to keep our car parked in the lot since our fee covered the whole day.  We hiked through the downtown area to Independence Hall.  As we came back we stopped at a microbrewery to get lunch.  I was hoping for a Philly Cheesesteak sandwich, but believe it or not, they did not have one.  They had more pub food, but they did have a Philly cheesesteak egg roll.  Yeah, weird, huh?  But that’s what I got.  It was tasty, but the crunchy egg roll was different.

Monday was our last day in Lancaster, and we decided to take a train ride on the Strasburg Rail Road.  Dennis spent his life on trains, but I was super excited.  I also knew that this ride would take us through the beautiful hills of Amish country.  When we got there, we were surprised to learn that this little 45 minute jaunt would be pulled by engines from the Norfolk and Western Railroad.  This is the railroad that Dennis started his railroading career.

Tuesday we loaded up and left for Beaver Falls, Pennsylvania.  Beaver Falls northwest of Pittsburg, not too far from the Ohio border.  A very good friend from college moved there with her newlywed husband years ago, when he finished seminary and was coming to his first pastorate.  He has since retired, but still lives in the area.  There was a Harvest Host location just about a mile from their home.  It is a regional airport that has a small museum where they restore old military aircraft.  We were able to park for free at their location.  We toured the museum, and then headed off to Ric and Dee Dee’s for dinner and the evening.  The next morning they came to visit us in our little home on wheels.  After they left, we also left . . . making our way to Ohio.

Once again, we just took a short drive, and stayed at a campground in Statesville, Ohio.  I have a friend from high school who lives in Chagrin Falls, Ohio, which is nearby.  Margo and I had some classes together, but I remember her most because we were in drama club together.  Although most of my drama club experience was back stage and publicity, she was the actress on stage.  To this day she has continued to perform in community theaters.  What a joy to go to Chagrin Falls for  dinner with her and John.  We walked around this pretty little downtown area.  The next day they also visited us at our RV.  I love that so many people want to understand how we can live for so many days traveling this way.  Once they visit us, they see how easily this can work and be comfortable.

We left Ohio and made our way to Indiana.  I have family there also.  Yes, I have family all over this beautiful country, and if I don’t have family somewhere, you can bet your bottom dollar that I might have friends somewhere nearby also!  This was a lot. I will give Indiana and further adventures in the next blog. Thanks for hanging in there on these travel blogs. I promise one day to get back to gritty topics!