Last night I thought about a Christmas photo of me with my oldest sister, Marilyn.  It was the Christmas of 1954.  My husband always wonders how I remember what year something was in my life.  Many times I remember a date because I associate the memory with something of significance in my life or in my world around me.  This one was easy because the photo that was scanned had a date written the back!  Marilyn received a new camera, and I received a Cinderella watch.  I love the television in this photo along with the Christmas tree with tinsel hanging on it.

This photo brought memories back of the first house I lived in.  My dad built the home on the property of his parents’ farm.  Not only did my dad live there, two of his other brothers lived near us, and more would be coming soon.  When my dad built this home, he borrowed my grandfather’s mule, and used it to dig out the foundation of the house.  Shortly after the house was built, the mule died.  My dad said Grandpa always blamed him for killing the mule by overworking it! 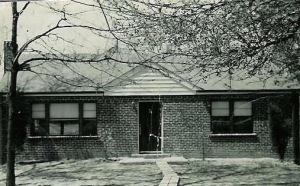 This home was the first house my parents owned, and I lived there until I was in 2nd grade.  Now granted, I was very young living there, but I have huge memories of that home.  My grandmother lived next door in the big brick house, and when I was a preschooler, I would walk to her home, and I sat in her kitchen with white tile up the wall

and black and white checkered tiles on the floor.  She would feed me cookies and milk at the small table.  The glass of milk was in a thick old fashion glass, and it was heavy and bulky for my littles hands to to get around, thus needing to use both hands to hold the glass.  There was a cherry tree in her back yard near the kitchen door.  My older sisters who were 4 and 6 years older than me would climb the tree and feast on the cherries.  I stood at the bottom of the tree, too little to climb, and patiently waited as my sisters would occasionally toss me a cherry. 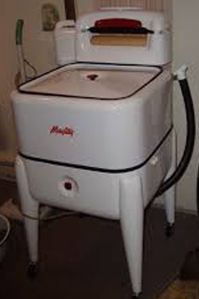 In our little brick home, my mom did the laundry on Mondays.  My sisters were in school, and I would sit on the open basement steps and watch Mom do the laundry in her double tub automatic wash machine,  We played a lot in the basement, which also served as a garage for our family car.  Of course, we played what we knew, so many times my sisters would play Sunday School.  I learned to recite the 23rd Psalm playing Sunday School with my older sisters.

Our home was a two bedroom home, one bath, with a living room, dining room, and kitchen.  I do not have memories where we ate dinner, if it was in the kitchen (which I think

might have been too small for the five of us), or in the dining room.  A special dinner was when my mom made her famous Sloppy Joes, and we would sit int he living room, eat dinner and watch “Our Miss Brooks” on the tiny television, followed by “The Wonderful World of Disney,”  I was always the happiest when it showed Mickey Mouse cartoons, especially with Donald Duck—I loved Donald Duck.  I 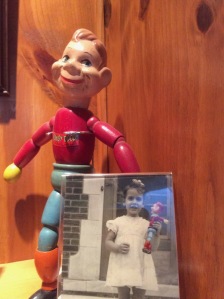 have research the title of the original television show, and I can’t find an actual title–it was aired by several networks and the name changed with the networks.  Another all time television favorite of mine, watching on that tiny screen was “The Howdy Doody Show.”  I was a big fan, and even had a Howdy Doody doll, of which I own a replica of since I have a rare photo of me with this doll.

We had a large console radio in the home.  My mother loved listening to Kate Smith sing.  She pretty much put “God Bless America” on the map.  I would open the doors to this large piece of furniture, stand with my back to the radio, an pull the doors slightly closed around me, and sing along, and pretend I was Kate Smith or some famous singer singing along with Frank Sinatra or Bing Crosby.

When I had my appendix removed in 1955, I could not start school that year until I recovered.  My mother went to the school to get the lessons I was missing.  I so distinctly remember the spelling workbook, learning to spell such big words like cat!  While recuperating, I had received a gift of a toy doctor’s bag.  It had a pretend stethoscope, a pretend thermometer, and I am sure a few other “medical” items.  I lined up my dolls all over the living room furniture to play hospital.  (Children play what they know).  I took my stethoscope and listened to all their hearts.  I had one doll that had a hole on her bottom.  She was a doll I could feed water too, and then she would wet her diaper by the gravity method of the water going through her to her bottom!  Like why did I think changing a doll’s diaper would be fun?  It was nothing like changing real baby’s stinking diapers!  Since this was the only doll with the bottom hole, she got a rectal temperature taken just like then did me in the hospital!

I played with a boy named Ralph Oswald.  I don’t remember much about him, and I am amazed that his name popped up into my head.  All I remember is that he lived on Ramona Avenue and his house was bigger than ours.  I went with my mother to that house for a Fuller Brush party.  What an odd random memory to come back to me!

Did I get into mischief at that house?  You betcha, I did!  In the summer, my mom would fill up a blow up pool in our front yard, and then we had to wait an hour or two for the water to warm up, before we could get in.  I was probably around four or five years old, and my cousin Peggy was at our home, who was two years younger than me.  We were in our swim suits waiting for the water to warm, and we were quite experts at making mud pies.  Do kids even make mud pies anymore?  I realized we had this tiny hill that went from the front yard to the driveway, and if it got muddy, we could slide in the mud down to the driveway.  It was a short distance, but for two little ones, it was perfect.  We slipped and slid down this muddy hill, until my mother walked outside and saw we were mud head to toe.  That ended our swimming privileges.  She dumped the water out of the pool and took us inside to bathe.  I was so disappointed we didn’t get to swim, but I must admit, I still remember the joy of slip sliding in the mud!

I started school living in this house.  There were no buses.  I walked several blocks to get there.  I was a reluctant student.  My mom walked me there when I was in kindergarten.  I recall crying when she left—that lasted about 30 seconds once I saw the fun activities I could do.  In kindergarten we snacked on butter cookies that looked like a flower with a hole in the middle, and juice.  I remember drinking juice, not milk.  We put on a play for our parents—most moms didn’t work back in those days, so we had lots of moms there.  We acted out “Billie Goats Gruff”, you know the story with the troll under the bridge and the little goats afraid to cross until the big one knocked the troll into the water.  We also did hula dancing with grass skirts.  Then the boys came out and danced in the grass skirts also, and we thought it was so funny.  Silly little things I remember!

We lived in that house for six years.  My dad had during this time become a building contractor, and had built a subdivision of 1950’s ranch style homes across town, where we moved when I was in the second grade. I didn’t particularly like the new house because the windows were high, and when I first moved there, I had to jump up to see out of my bedroom window.  I moved to a school with a cafeteria, and no longer had to carry my lunch and eat at our desks.

It is funny how as I started writing about living in this first home, many memories came flooding back.  For as many years as I lived there, there is much that I do not remember.  I was very young, and it’s a been a long time since those days–memories fade.  That is part of the reason I am writing my blog.  I want to document what I remember about my life for my children, grandchildren, and future great grandchildren.  I cherish the memories that my parents and grandparents have put in writing about their lives.

Have you started documenting the memories from your life?  My family doesn’t ask me many questions about my past, but I know that since my parents and grandparents are gone, there are so many more questions I wish I had asked.  One day my family might want to read these memories–if not, I hope you enjoyed them!